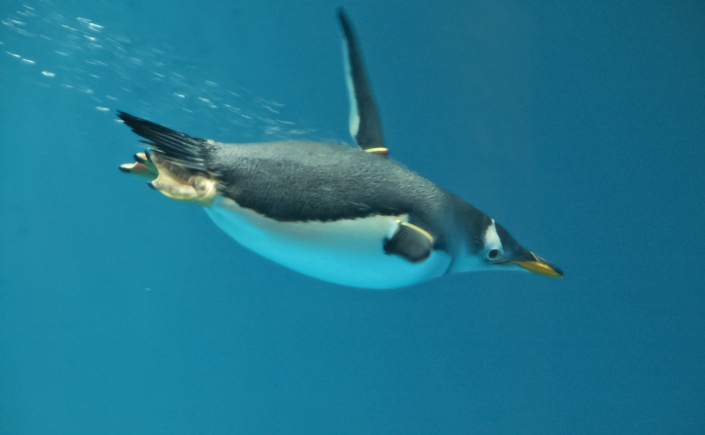 Unraveling the evolutionary changes to the hemoglobin protein in penguins.

The study of evolution is sometimes described as “just” a historical science, in comparison to the “superior” experimental sciences. This characterization – popular among creationists – is obviously plain poppycock. Although evolutionary biologists study the history of life on Earth, they use a variety of tools, including experiments. One of the most exciting experimental approaches is the resurrection of ancient proteins to understand how they might have functioned in the ancestors of modern species. A recent study in the journal PNAS provides a beautiful example of this strategy. Researchers reconstructed the hemoglobin protein of the common ancestor of penguins and their non-diving relatives to investigate how this protein has changed over millions of years of evolution.

As you probably know from nature documentaries, penguins dive to great depths to find food. These deep dives require an efficient use of oxygen. Here, the protein hemoglobin plays an important role by binding to oxygen and carrying it to certain tissues. Experimental measurements already showed that hemoglobin in several penguin species has a higher oxygen-binding affinity compared to other bird species. This feature could have evolved in a number of ways: (1) penguins might have evolved an increased affinity for oxygen, (2) non-diving birds might have evolved a decreased affinity for oxygen, or (3) the change happened in both direction, namely increased affinity in penguins and decreased affinity in non-diving birds. To discriminate between these three options, the researchers reconstructed the hemoglobin of the common ancestor of penguins (which they called AncSphen) and the hemoglobin of the common ancestor of penguins and their non-diving relatives (AncPro).

Attentative readers might remark that the non-diving relatives in this scheme – the order Procellariiformes – also dive for food. However, these birds do not perform the extremely deep dives that penguins do.

Experiments with the two resurrected proteins – AncSphen and AncPro – revealed that AncSphen has a significantly higher affinity for binding oxygen compared to AncPro. This suggests that penguins have evolved an increased oxygen-binding affinity whereas non-diving birds probably experienced little changes (which fits with scenario 1 mentioned above).

Next, the researchers took a closer look at the role of cofactors, which are chemical compounds that can improve the functioning of proteins. Further experiments revealed that, when cofactors were added to the mix, AncSphen responded two times stronger to changes in pH than AncPro. At lower pH, AncSphen showed a decreased affinity for binding oxygen, releasing it more easily. This particular response to pH – known as the Bohr effect – might compensate for the high oxygen-binding affinity of hemoglobin penguins when it has to unload oxygen at certain tissues.

The Journey of an Oxygen Molecule

To understand how all of this works, imagine being a oxygen molecule in the blood vessel of a penguin. You have just entered the lungs and become tightly bound to hemoglobin. As you are carried around the body, you wonder how this hemoglobin will ever let you go. Its oxygen-binding affinity is so strong that you cannot escape. However, as the pH starts to drop in the muscle tissue, you feel the grip of the hemoglobin loosening. Once the pH is low enough, you are released and can move into a muscle cell. In other words, the Bohr effect allows hemoglobin to unload its oxygen in acid tissues, resulting in a more efficient oxygen transport around the body.

An amazing adaptation that we managed to understand using an experimental approach. Keep that in mind when someone tells you that evolutionary biology is “just” a historical science.