This family, which contains Currawongs, Australian Magpie and Butcherbirds, is sometimes included in the Artamidae. I follow the AUO and consider it as a separate family.

Hybridization between two colour morphs of the Australian Magpie (Cracticus [previously Gymnorhina] tibicen) has been studied in detail. Morphological analysis of a contact zone in Victoria and New South Wales revealed an asymmetrical hybrid zone (Burton & Martin, 1976). This asymmetry could be explained by southward movement of the hybrid zone or divergent selection pressures. A genetic model based on dominance of black alleles over white alleles supported the selection hypothesis (Hughes, 1982).

Genetic analyses of the hybrid zone showed no population genetic structure between the colour morphs, which suggests that variation evolved in situ (“primary contact hypothesis”) and is not the result of secondary contact (Hughes et al., 2001). This finding was confirmed by other studies using more molecular markers (Toon et al., 2003). However, there is a clear phylogenetic break between eastern and western populations that can be attributed to Pleistocene refugia during aridification (Toon et al., 2007).

What mechanisms maintain the stability of this contact zone and explain the observed genetic patterns is still unclear. Black-backed individuals produce more fledglings, possibly because nests of white-backed morphs are more susceptible to predation (Hughes et al., 2002). There is limited evidence for positive assortative mating, but there are high levels of extrapair fertilizations (Hughes et al., 2011). Social structure may be an important factor to explain genetic patterns, larger groups show higher genetic diversity (Baker, Mather & Hughes, 2000) and gene flow occurs across large distances (up to 1600 km), mediated by juvenile dispersal (Baker, Mather & Hughes, 2001). One candidate gene (MC1R) was studied, but was not able to discriminate between the colour morphs. Other genes and/or regulatory elements may determine the back-colour variation (Dobson, Schmidt & Hughes, 2012). 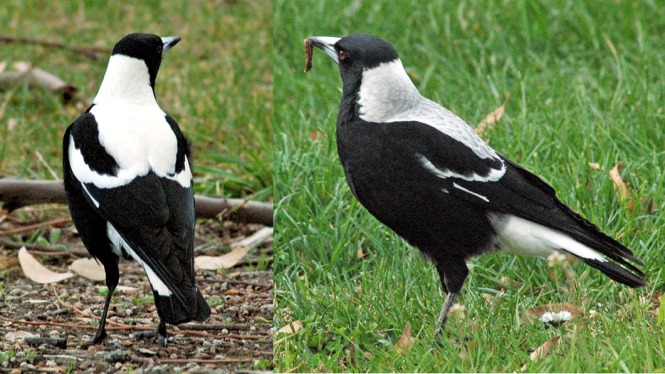 Hughes, J. M., Baker, A. M., De Zylva, G. & Mather, P. B. (2001). A phylogeographic analysis of southern and eastern populations of the Australian magpie: evidence for selection in maintenance of the distribution of two plumage morphs. Biological Journal of the Linnean Society 74, 25-34.