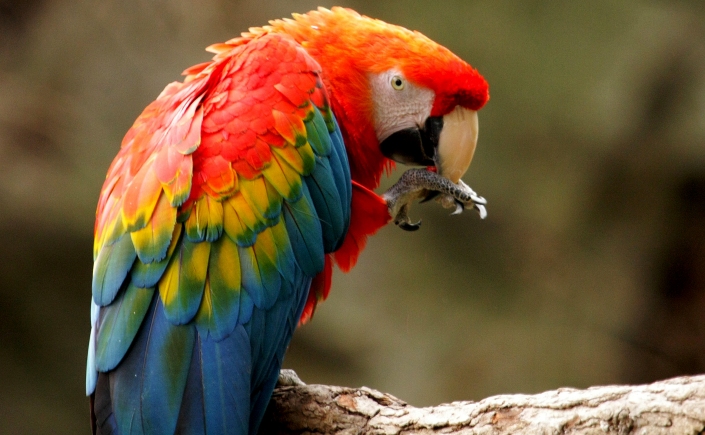 It turns out that size matters.

The colors of parrots never disappoint. Think of the red, yellow and blue plumage of the scarlet macaw (Ara macao), or the bright pink crest of the Major Mitchell’s Cockatoo (Cacatua leadbeateri). A quick overview of the ca. 400 species of parrots (order Psittaciformes) reveals a huge variety of color combinations. What explains this wealth of colors? And why are some species more colorful than others? One important factor is that parrots can synthesize their own pigments for the colors red and yellow (i.e. psittacofulvins), while other bird species need to extract such pigments from their diet (mostly carotenoids). This might allow parrots to deposit more of these pigments in their feathers. A second reason relates to the breeding behavior of parrots. Most species make their nests in cavities where they are safe from predators. There is no need for camouflage, so parrots can develop colorful plumage patterns.

These are just two possible explanations for the colorfulness of parrots. A recent study in the Journal of Evolutionary Biology dug a little deeper and uncovered several other factors that contribute to the amazing variety of colors in parrots.

Luisana Carballo and her colleagues quantified the color patterns of 398 parrot species using the Handbook of Birds of the World. Their analyses showed that phylogeny explained a large part of the variation. It seems that birds of a feather flock together on the evolutionary tree. After controlling for the shared evolutionary history, the remaining factors explained up to 15 percent of the variation in colors. Let’s have a look at the main patterns.

First, larger parrot species tend to have more elaborate colors. This finding probably relates to the lower predation pressure on larger species. Most predators are no threat to large parrots, so they can afford to draw the attention with their colorful plumage. In addition, larger parrot species form long-lasting pair bonds which involves mutual mate choice. Both partners need to be satisfied with their choice if they are going to spend a lifetime together (which can be up to 100 years…). So, we can expect both sexes to be equally ornamented due to this mutual mate choice, similar to other tropical species (see for example this study).

Interestingly, although smaller species sport less elaborate colors, they show larger color differences between males and females (i.e. higher levels of sexual dichromatism). These patterns suggest stronger sexual selection in the smaller species. This idea is supported by a study on sperm morphology that reported a positive correlation between the length of sperm cells (a proxy for the strength of sperm competition) and the degree of sexual dichromatism in parrots. High levels of sperm competition also suggest that females will mate with multiple partners, but the frequency of these extra-pair copulations remains to be determined.

Another peculiar pattern is that parrots tend to be darker in wetter areas, a phenomenon known as Gloger’s Rule (which I also covered in this blog post on gulls). The exact mechanisms behind this biogeographical rule remain unclear. It could be that darker colors are more suitable for camouflage in wetter environments where more vegetation results in lower light conditions. However, this hypothesis conflicts with the elaborate colors of larger parrot species that do not rely on camouflage. A second possibility concerns degradation of feathers by bacteria. Wet conditions are conducive for the growth of feather-degrading bacteria. The deposition of the dark pigment melanin protects the plumage from these feather-munching menaces. In addition, parrots are redder in wetter environments. The red pigment psittacofulvin might also provide more protection against these bacteria.

This study nicely illustrates the complex interplay of evolutionary and ecological forces in shaping the wonderful colors of parrots. It reminds me of a conversation between physicist Richard Feynman and an artist. The artist argued that science takes away the beauty of nature. Science is “unweaving the rainbow” as John Keats put it. Feynman disagrees and explains how science only add to the beauty, using the example of a flower. The same reasoning applies to the amazing wealth of colors in parrots.

I can appreciate the beauty of a flower. At the same time, I see much more about the flower than he sees. I could imagine the cells in there, the complicated actions inside, which also have a beauty. I mean it’s not just beauty at this dimension, at one centimeter; there’s also beauty at smaller dimensions, the inner structure, also the processes. The fact that the colors in the flower evolved in order to attract insects to pollinate it is interesting; it means that insects can see the color. It adds a question: does this aesthetic sense also exist in the lower forms? Why is it aesthetic? All kinds of interesting questions which the science knowledge only adds to the excitement, the mystery and the awe of a flower. It only adds. I don’t understand how it subtracts.