The Swainson’s Trush (Catharus ustulatus) looks like a dull brown bird, but this species serves many scientists as a useful study system. These birds migrate from Canada and Northern America to the South of Mexico, and even as far as Argentina. The intriguing thing about this migration is that coastal birds take a different route compared to continental ones (as so-called migratory divide). These divergent migration strategies have even led taxonomists to recognize two subspecies: the coastal, russet (C. u. ustulatus) and inland, olive-backed thrush (C. u. swainsoni). Even more striking is that these subspecies hybridize. 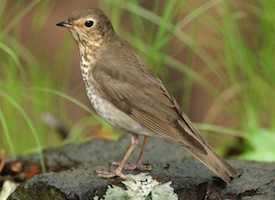 In 1991, Helbig studied the migratory behavior of European blackcap warblers (Sylvia atricapilla) and their hybrids in the laboratory. Blackcaps orient their migration either southwest or southeast, depending on their migration routes. Hybrids between birds that use different migratory strategies direct their migration intermediate, namely south. Kira E. Delmore and Darren E. Irwin tested whether the same holds for the Swainson’s Trush. However, they went one step further than Helbig and investigated the situation in the wild. They tracked the migration routes of several birds by means of geolocators. In order to discriminate between coastal, inland an hybrid thrushes, they genotyped all individuals.

A strong relationship between genetic background and migratory route became apparent. However, hybrids displayed a wide variety of migration strategies. Some used intermediate routes, while others used the same route as one parental species in fall and the other in spring. This mixed strategy is quite unexpected and certainly warrants further research. 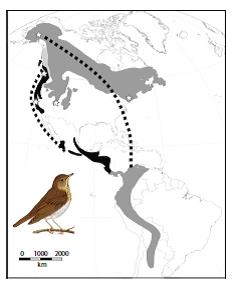 Delmore and Irwin already state that “migratory behavior could play a major role in the speciation of birds.” Another group of researchers tackled this issue by applying the newest genomic tools. Kirsten Ruegg and her colleagues tested the recent and popular idea that speciation genes tend to cluster in certain genomic regions, forming genomic islands of divergence. They discovered at least one island of divergence on 15 of the 23 chromosomes when comparing  the two subspecies. Genes linked to migratory behavior were not more divergent than expected by chance alone. Surprisingly, they were not located in the islands of divergence, which might indicate that divergence in migration and the formation of genomic islands are driven by separate processes. Nonetheless, migration seems to be a powerful force in the origin of new species.