Most bird studies in the Neotropics focus on the Andes or the Amazonian Basin. A logical choice given the extraordinary biodiversity there. However, ornithologists have also started exploring Central America and Mexico (often referred to as Mesoamerica). A recent study on the White-collared Seedeater (Sporophila torqueola) complex is an interesting addition to this list.

Most taxonomic authorities divide this species complex into three to five geographically restricted subspecies, which mainly differ in male plumage. In the Pacific lowland of Mexico you can find the subspecies torqueola. The Caribbean side of Mexico houses another subspecies morelleti. Finally, the subspecies sharpei occurs on the coastal Gulf of Mexico. To recap, here are the three subspecies accompanied by a map showing their distributions. 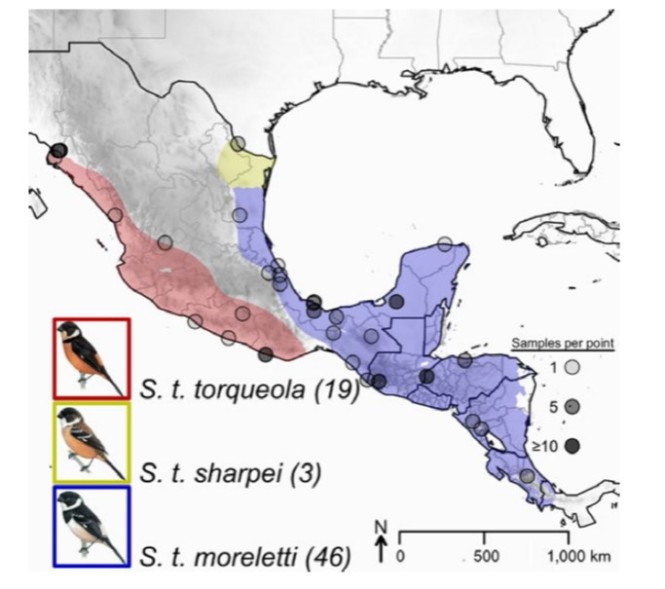 A Lot of Specimens

Nicholas Mason and his colleagues measured over 600 specimens (although if you check the authors contributions, it turns out Arturo Olvera-Vital did all the measuring. Well done, Arturo!). The morphological characters clearly showed three clusters, corresponding to the three subspecies.

For a genetic perspective, the researchers used UCEs (which stands for Ultra-conserved Elements, not Uganda Certificate of Education). These are a class of highly conserved and abundant nuclear marker distributed throughout the genomes of most organisms. The analyses of these markers revealed a deep split between torqueola and the two other subspecies. Despite their genetic differences, a demographic analysis indicated low levels of gene flow. There might have been some hybridization in the past. 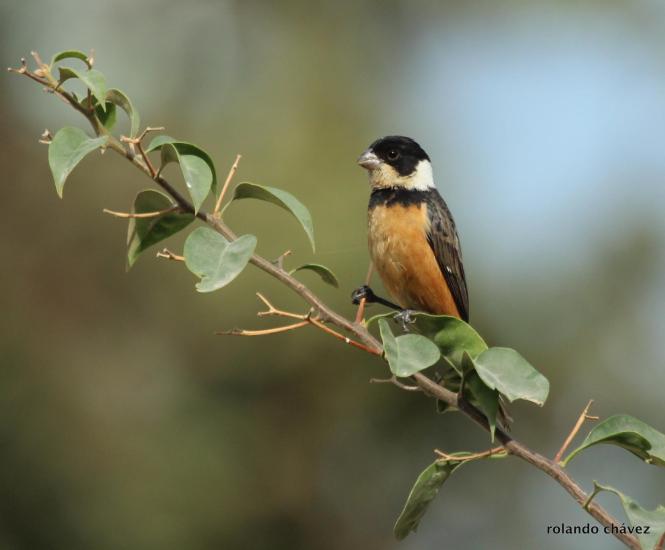 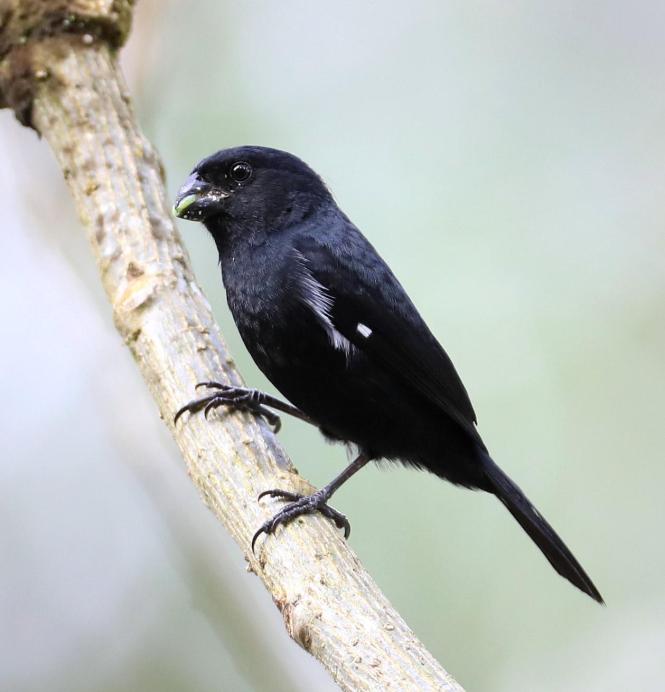 This paper has been added to the Thraupidae page.

One species was probably hunted to extinction by the first settlers.

Worldwide there are six species of swan (in the genus Cygnus). In Europe, you mostly encounter white swans, such as the Mute Swan (C. olor). But occasionally, a black swan may swim of fly by. This species – conveniently called the Black Swan (C. atratus) – naturally occurs in Australia and New-Zealand and has been introduced in other parts of the world. In fact, it is the only native swan species Down Under. But that used to be different. Scientists studied fossils from the period 1280-1880 and concluded that there used to be two species of Black Swan in Australia and New-Zealand. 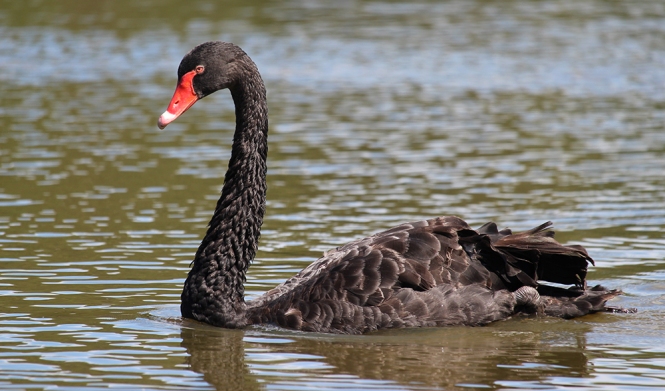 Nicolas Rawlence (Otago University) and his colleages succeeded in extraction DNA from these fossils. The genetic material they obtained was vastly different from the current Black Swan population. It was even so different that the researchers concluded that they were dealing with another species. This new – but extinct – species was named Poūwa after Maori legend (the Maori are the indigenous population on New-Zealand).

The extinct species is also morphologically different. On average, these birds were bigger and heavier compared to their extant relatives. If you manage to put a Black Swan on a scale (something I wouldn’t try in the breeding season), the balance will read four to nine kilograms. The Poūwa is a bit heavier, between six and ten kilograms. Moreover, it also had shorter wings and longer legs. This suggests they it might have been on its way to flightlessness. Losing the ability to fly is a common phenomenon on islands. Think of the Flightless Cormorant (Phalacrocorax harrisi) on the Galapagos Islands, with its tiny wings it cannot take to the skies. 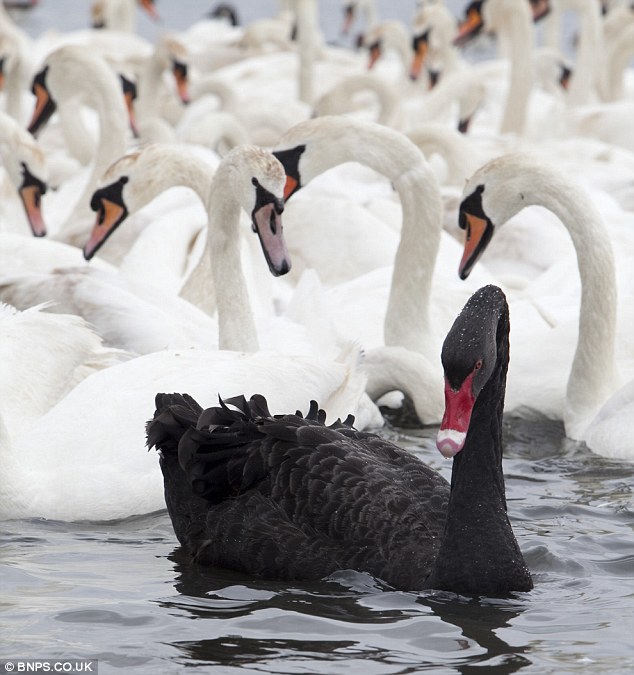 How did the Poūwa go extinct? When Europeans arrived on New-Zealand in the eighteenth century, there were no swans. Probably, the Poūwa was hunted by early settlers that reached New-Zealand from Polynesia around 1280. Remains of Black Swans in archaeological sites suggests they were on the menu. So, in the eighteenth century there were no swans on the islands, but now there are. What happened in the meanwhile? In 1860, Europeans introduced Black Swans on New-Zealand although some birds might have flown over from Australia at their own pace.

Another recent study on these Black Swans suggested that some Poūwa’s survived and interbred with the newly introduced Black Swans from Australia. However, this study – by Valeria Montano and colleagues – is based on microsatellites and might lack the statistical power to provide strong evidence for this scenario. For more information on this debate check out the correspondence following the publication of the ancient DNA study (see here and here).

Two hybridizing subspecies of the Flame-rumped Tanager have been in contact for at least 6000 years.

What color do you get when you mix red with yellow? Orange, obviously. This fact cannot only be illustrated by a three-year-old and some water-paint, but also by studying the Flame-rumped Tanager (Ramphocelus flammigerus). This tropical species, which lives in Panama, Colombia, Ecuador and Peru, is classified into two subspecies flammigerus and icteronotus that differ in plumage color. The first one has a deep red color while the second one is bright yellow. And hybrids between the two are -you guessed – orange.

Hybridization between these subspecies (which are sometimes considered separate species) has been known for some time. In 1932, Ludlow Griscom showed that several Tanager species were in fact hybrids between flammigerus and icteronotus. The title of his paper was short but brilliant: “Notes on Imaginary Species of Ramphocelus.”

A few decades later, Charles Sibley – the father of avian hybrid zone studies – traveled to Colombia to study the hybrid zone between the two subspecies. He concluded that hybridization was the result of recent human activities in the region, particularly deforestation and growth of crops:

Present evidence indicates that the cutting of the virgin forest from the western slopes of the Western Andes permitted the two types to come into secondary contact after a period of isolation during which the observed differences evolved. 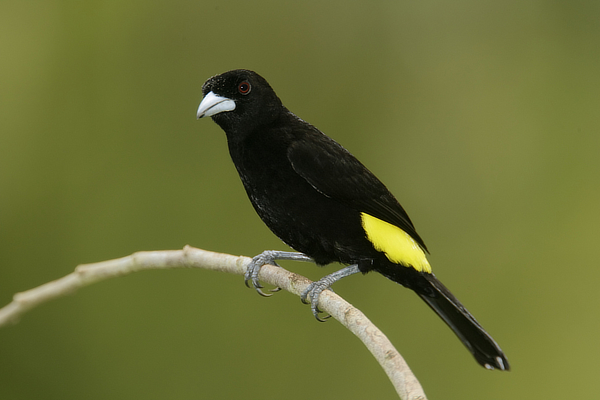 A Flame-rumped Tanager of the yellow-colored subspecies icteronotus.

In a recent study, Andrea Morales-Rozo and colleagues revisit this case by sampling different hybrid zones in Colombia. Based on genetic analyses and modelling of historical distributions, they show that Sibley was partly correct. The two subspecies probably came into contact about 6000 years ago following an expansion of flammigerus. Recent human activities might have contributed to hybridization.

Although our analyses suggest that climatic conditions were suitable for contact between these forms thousands of years prior to major human-caused alterations in the area, it is likely that anthropogenic activities have facilitated contact between them, possibly leading to an increased incidence of hybridization in recent times.

In addition, the hybrid zone seems to have moved to the east and shifted to higher elevations. The reasons for this change are not clear yet. There is still plenty to learn about the Flame-rumped Tanager, but at least we are sure that red + yellow = orange. 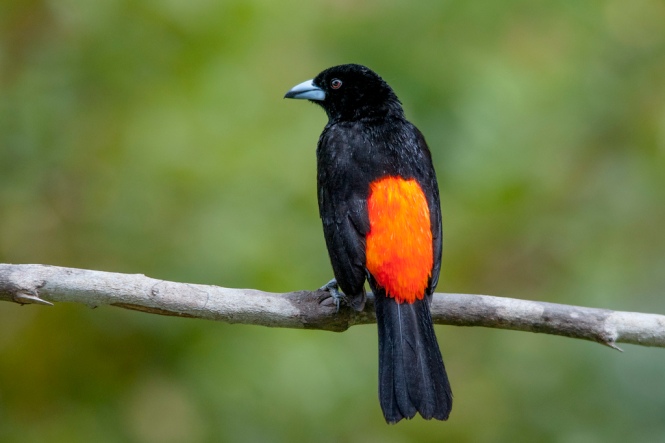 The papers have been added to the Thraupidae page.

Two recent papers use ancient DNA to show admixture between mammalian species during the ice ages.

Physicists are often discussing the possibility of time travel, venturing back into the distant past to relive history firsthand. Sounds very exciting, but until the construction of time machines, we will need to rely on other means to explore the past. Biologists, for example, use fossils. And nowadays, it is even possible to extract and sequence DNA from fossil remains. Two recent papers have applied this technique to uncover the evolutionary history of elephants and bears.

Let’s start with the elephants. Today, three species of these majestic giants roam the Earth. The forest elephant (Loxodonta cyclotis) and the savanna elephant (Loxodonta africana), and the Asian elephant (Elephas maximus) in – you guessed it – Asia. I had the honor of observing these animals from close range during a trip to Tanzania a couple of years ago (see photo). 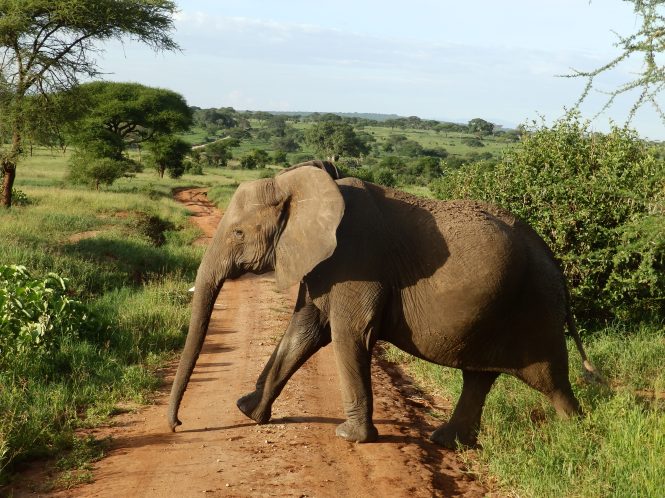 An elephant crossing the road in Tanzania

These three elephant species are the only survivors of a much larger order (Proboscidea). In their paper, Eleftheria Palkopoulou and her colleagues focus on two extinct groups within this order: the mammoths and the straight-tusked elephants. They sequenced the genomes of two mammoth species – woolly mammoth (Mammuthus primigenius) and Columbian mammoth (M. columbi) – and one member of the straight-tusked elephants (Palaeoloxodon antiquus).

Analyses of these ancient genomes revealed hybridization between several species. The straight-tusked elephants seemed to have received genetic material from at least three sources: the ancestors of the forest and savanna elephants, woolly mammoths and forest elephants. And in North America woolly mammoths and Columbian mammoths were interbreeding. The family tree of the elephants is getting quite bushy. 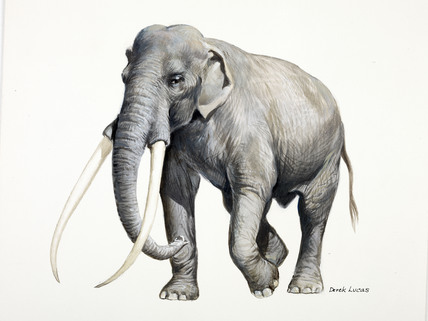 Artist impression of a straight-tusked elephant (from: http://www.museumoflondonprints.com)

Several studies have shown that brown bears (Ursus arctos) and polar bears (U. maritimus) have hybridized in the past. But what happened exactly? Currently, scientists are discussing two main scenarios. In one model – the population conversion model – the warming climate at the end of the last ice age (about 11,000 years ago) allowed brown bears to disperse into the range of polar bears and interbreed with them. The alternative model states that hybridization occurred before the last ice age and did not continue afterwards.

To discriminate between these scenarios James Cahill and his colleagues sequenced DNA from ten cave-preserved bones from Ireland. The age of these fossils ranges from about 40,000 to 4,000 years ago. The analyses revealed that genetic ancestry from polar bears in the brown bear genomes peaked at the end of the last ice ages and declined until the extinction of the Irish population. This pattern is consistent with the population conversion model, but it does not rule out the possibility of hybridization before the end of the last ice age. Sequencing older fossils might be necessary to confidently support one of the models. 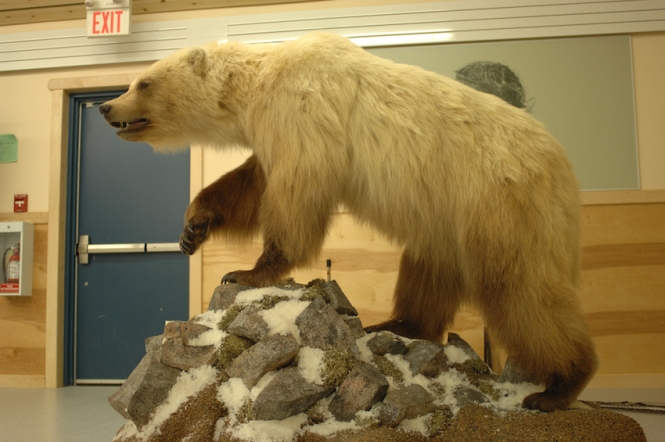 A second-generation polar-grizzly hybrid on display in the Ulukhaktok Community Hall, Ulukhaktok, Canada (from: http://sciencenordic.com/)

The importance of ice ages

Regardless of which model is more accurate, hybridization between brown bears and polar bears seems to be related to the ice ages. Similarly, hybridization events with straight-tusked elephants were dated to ~120,000 years ago, which overlaps with the glacial cycles. In fact, my own research (on the evolution of geese) also highlights the pivotal role of the ice ages in hybridization:

The reconstruction of historical effective population sizes indicates that most species showed a steady increase during the Pliocene and Pleistocene followed by population subdivision during the Last Glacial Maximum about 110,000 to 12,000 years ago. The combination of large effective population sizes and occasional range shifts might have facilitated contact between diverging goose species, resulting in the establishment of numerous hybrid zones and consequent gene flow.

Hybridization as the norm

These complicated histories show that we need to take hybridization into account when studying the evolution of mammals. Indeed, in the elephant study the authors write that “our results […] thus add to the growing weight of evidence in favor of the view that capacity for hybridization is the norm rather than the exception in many mammalian species over a time scale of millions of years.”