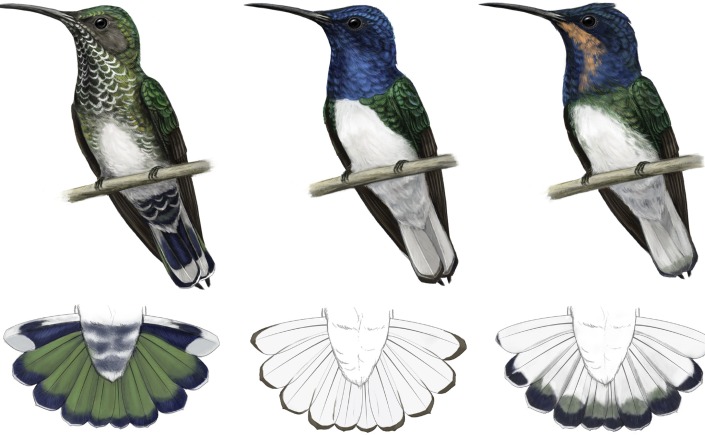 Testing different adaptive and non-adaptive explanations for this phenomenon.

In almost one fourth of hummingbird species, some females sport the same colorful feathers as males. This estimate is based on a recent study in the Proceedings of the Royal Society B in which the researchers inspected no less than 16,542 museum specimens. They suggested that this phenomenon – known as female-limited polymorphism – occurs in every major group of hummingbirds, suggesting that it arose independently at least 28 times (but see this paper for another perspective). These patterns raise the question why some females resemble males in so many hummingbird species. We have the reflex to immediately look for adaptive explanations. A trait that is so widespread should be beneficial, right? However, we should not forget about the possibility of non-adaptive origins. As evolutionary biologist Stephen Jay Gould nicely put it: “The primary flexibility of evolution may arise from non-adaptive by-products that occasionally permit organisms to strike out in new and unpredictable directions.” In the present study, Eleanor Diamant and her colleagues followed the advice of Gould and tested two non-adaptive explanations for the evolution of female-limited polymorphism in hummingbirds.

The first non-adaptive explanation entails a shared genetic architecture for certain traits between the sexes. Strong selection on plumage patterns in males (and the underlying genes) might also affect the genetic make-up of females. Because males and females tend to have opposite evolutionary interests – males need to be colorful to attract mates while females need to be inconspicuous to avoid nest predation – a genetic conflict arises. Theoretically, this situation can be resolved if the genetic basis for particular plumage traits becomes sex-linked, resulting in clear sexual dichromatism (i.e. males and females always look different).

Moving on to the second non-adaptive explanation: perhaps the male-like traits in females are the outcome of selection on other traits with a shared genetic basis (i.e. pleiotropy). The researchers focused on bill length which often differs between the sexes. Possibly, selection for certain bill sizes indirectly causes male-like plumage to develop in females. An intriguing hypothesis, but the analyses did not support it. Overall, there were no clear relationships between relative bill length and the plumage-type of females across the tested species (see figure below). This result led the researchers to dismiss the pleiotropy hypothesis, although they mention that “correlations with other unmeasured morphological traits could exist.” Indeed, we should not throw out the baby with the bathwater and test other traits for pleiotropic effects. Bill length was an obvious first candidate, but more morphological features remain to be tested.

Given the limited support for non-adaptive explanations, the researchers turned to adaptive reasons for the evolution of female-limited polymorphism. Towards the end of the discussion, they noted that:

We found significant associations with migratory status, lower mean precipitation, and marginal association of FLP with social dominance, all of which are linked to interspecific interactions and competition over resources.

Although these patterns are certainly interesting, I am not convinced yet. It is tricky to draw general conclusions from such statistical associations. And indeed, the researchers remain careful and present these results as “preliminary support” for social selection. A promising starting point, but more analyses are warranted. Because female-limited polymorphism has evolved independently so many times, it is possible that different evolutionary mechanisms are operating in different species. For example, the Anna’s hummingbird (Calypte anna) did show a positive correlation between bill length and female plumage, suggesting that a pleiotropic effect might be present in this species.

It would worthwhile to explore each hummingbird species with female-limited polymorphism separately to determine which adaptive or non-adaptive explanation is most likely. A recent study in the journal Current Biology provides a nice example, showing how female White-necked Jacobins (Florisuga mellivora) have evolved male-like plumage to avoid social harassment. Combining such behavioral studies with genomic analyses to pinpoint the genetic basis of female-limited polymorphism across different hummingbird species will provide exciting insights into the evolution of this phenomenon.

In the classic verbal model of allopatric speciation, a geographic barrier arises and splits a population in two. Over time, these isolated population diverge genetically and slowly evolve into distinct species. So, when you observe a geographic barrier, such as a river or mountain chain, between two species, it is tempting to infer that this barrier played a role in the speciation process. But this does not have to be the case. The barrier might have formed millions of years before the divergence of the species. Other evolutionary, ecological or geological processes might explain the origin of these species. This situation is nicely illustrated by a recent study on the Azure-crowned Hummingbird (Amazilia cyanocephala) which appeared in the Journal of Ornithology.

The Azure-crowned Hummingbird can be found from the north of Mexico to Nicaragua and has been divided into three subspecies: cyanocephala, guatemalensis and chlorostephana. Using a mitochondrial marker, Flor Rodriguez-Gómez and her colleagues detected four genetic lineages within this hummingbird species. Within the subspecies cyanocephala, there is a clear break between populations east and west of the Isthmus of Tehuantepec. A third genetic lineage corresponds to the subspecies guatemalensis and is separated from the other subspecies by the Motagua-Polochic-Jocotán fault system. Finally, the fourth genetic lineage (represented by the subspecies chlorostephana) can be found in the savannah pine forests of the Moskitia region in Honduras.

These patterns suggest that the geographic barriers across Central America – the Isthmus of Tehuantepec and the Motagua-Polochic-Jocotán fault system – drove the evolution of the Azure-crowned Hummingbird. But this scenario is not supported by the divergence times between the four genetic lineages. They originated within the last million years, whereas these geographic barriers arose much earlier (the current geological shape of the Isthmus of Tehuantepec probably formed about 6 million years ago). What factors did influence the evolution of the Azure-crowned Hummingbird?

Additional genetic analyses detected signatures of a population expansion before the last glacial maximum (about 20,000 years ago). This finding was corroborated by ecological niche modelling which indicated that the suitable habitat for the Azure-crowned Hummingbird was larger during this period. However, during the last inter-glacial (about 120,000 to 140,000 years ago), the distribution of suitable habitat was more fragmented, with major regions separated by the Isthmus of Tehuantepec and other smaller regions isolated in Honduras and Nicaragua. Together, these patterns point to cycles of contraction and expansion driven by climatic changes. Indeed, the authors conclude that:

Likely, phylogeographic structure in Azure-crowned Hummingbird was promoted by habitat fragmentation during interglacials and, if so, competitive exclusion in zones of contact and habitat specialization played a greater role on differentiation among the three subspecies than isolation by geographic barriers.