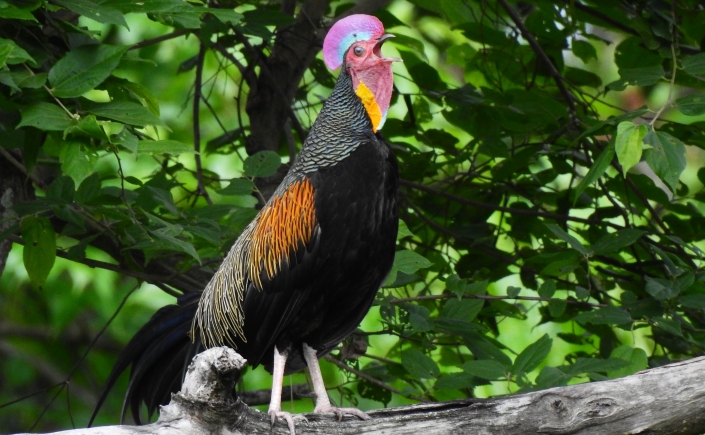 Although the domestic chicken is one of the most studied birds ever, the evolutionary history of its genus (Gallus) is still a mystery. The four species in this genus – Sri Lanka Junglefowl (G. lafayetti), Grey Junglefowl (G. sonneratii), Green Junglefowl (G. varius) and Red Junglefowl (G. gallus, the ancestor of the domestic chicken) – can be arranged in no less than 15 different topologies. Early genetic studies, using mitochondrial DNA or a few nuclear markers, reported evidence for six of these topologies. And a recent analysis of ultraconserved elements (UCEs) added a seventh possibility to the list. You can see an overview of these seven evolutionary arrangements in the figure below.

The discordant results among previous genetic studies can be explained by several factors. First, introgression can lead to patterns that deviate from the main evolutionary history (i.e. the species tree). Extensive gene flow from one species into another can pull distantly related species together in an evolutionary tree. Second, the random sampling of gene trees can cause issues. It is known that different genes tell different evolutionary stories. If you happen to sample a set of molecular markers that do not follow the species tree, you will draw the wrong conclusions. Third, some genetic markers might have too little phylogenetic information to confidently resolve phylogenetic relationships. These three issues can be addressed with whole genome sequences: there is plenty of data available and detailed analyses of gene trees can detect signatures of introgression and random sampling biases.

Moreover, the researchers took a closer look at the distribution of the gene trees. As expected, the most common gene tree (36%) reflected the topology described above. The remaining topologies can provide important insights into introgression dynamics. If there has been no introgression, two minor gene trees are expected to occur in roughly equal frequencies (similar to flipping a coin). Introgression, however, leads to a bias towards one minor gene tree. Additional analyses on gene tree distributions revealed several of such biases that pointed to introgression between Red Junglefowl and Green Junglefowl, and between Red Junglefowl and Grey Junglefowl.

So, now what? The two genomic studies report contrasting results and we still don’t know which species evolved first. Personally, I find the first study more convincing because it took different datatypes into account and provided a detailed overview of the gene trees. The second study, on the other hand, analyzed all autosomal gene trees in one go and did not report the distribution of these gene trees (I am very curious to see it). My bet would thus be on the Green-Junglefowl-first-scenario.

However, until now we assumed that the evolutionary history of the genus Gallus can be captured in a bifurcating tree. This is not necessarily the case. The high levels of ancient and recent introgression between these species might be better depicted in a phylogenetic network (see for example here). Trying to find the “true” species tree could be seen as a wild goose (or chicken) chase. And the question which junglefowl species evolved first becomes a bit nonsensical.