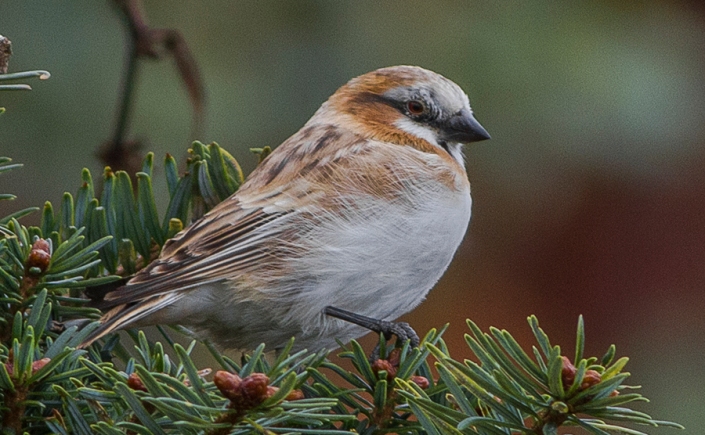 Life in the mountains is not easy. At very high altitudes, the concentration of oxygen drops, potentially leading to severe health risks. Nonetheless, several animal species – including humans – manage to thrive in these extreme conditions, despite facing many physiological challenges. Apart from the low oxygen concentrations in mountainous areas, temperature can also significantly drop. One important hurdle for high altitude animals thus concerns keeping a stable body temperature in these cold environments. Moreover, you will also need to move around to gather food and find a mate. An efficient energy metabolism is thus crucial.

There are several ways to amp up your metabolism, such as bigger muscles to do the work, more capillaries to transport the little oxygen that is available, and having more mitochondria (the powerhouse of the cell) in your muscle fibers. A recent study in the journal PLoS Genetics took a closer look at three high altitude bird species: the White-rumped Snowfinch (Onychostruthus taczanowskii), the Rufous-necked Snowfinch (Pyrgilauda ruficollis), and the Tree Sparrow (Passer montanus). It turned out that these species do indeed have bigger pectoral muscles and more mitochondria in their muscle fibers. But these phenotypic features were just the tip of the iceberg.

Experimental work on these species revealed that they showed more efficient use of glucose (i.e. blood sugar). After a meal, the level of glucose in the blood increases. This rise in blood sugar triggers the production of the hormone insulin which converts some glucose into glycogen for later use and makes body cells take up the circulating glucose. These processes bring the blood sugar level down to stable levels. The researchers compared the processing of glucose in highland and lowland birds. The experiments indicated that “highlanders exhibited a more rapid normalization of blood glucose.” The difference between highland and lowland birds was even more pronounced when they were injected with insulin (an extra trigger to convert the glucose), suggesting that highland birds are more sensitive to this hormone. The extra insulin sensitivity can be regarded as an adaptation to life at high altitudes.

Next, the researchers focused on the genetic basis of these adaptations. They correlated the muscle phenotypes with genetic data in search of candidate genes, and they looked at gene expression data to see which genes were active in the muscle tissue. These analyses uncovered two interesting genes: EPAS1 and MEF2C. Readers familiar with the literature on hybridization might recognized the first gene. EPAS1 has been found in several human populations that adapted to high altitudes. Moreover, one variant of this gene probably introgressed from the extinct Denisovans into Tibetans. EPAS1 becomes active in low oxygen conditions. The other gene – MEF2C – ensures the maintenance of muscle mass and healthy glucose levels, important features when living in the mountains.

Finally, more detailed genomic analyses on highland and lowland populations of the Tree Sparrow revealed additional candidate genes. Several of these genes have also been identified in other high altitude species, such as the Andean House Wren (Troglodytes aedon) and the Band-winged Nightjar (Hydropsalis longirostris), pointing to convergent evolution. The most important ones were:

The last gene in this list (METTL8) is especially interesting, because certain variants of this gene were significantly associated with the expression of MEF2C (the gene found in the previous analyses). Additional experiments showed that birds with an particular mutations at sites 326 and 395 in this gene developed larger muscles and expressed more MEF2C. A few genes might thus make life at high altitudes a little bit easier.

One thought on “How can Snowfinches and Tree Sparrows survive at high altitudes?”