The evolution of baleen whales was influenced by introgressive hybridization.

For some time I have been advocating the use of phylogenetic networks (see here). Due to processes such as hybridization and rapid speciation, it can be impossible to capture the evolutionary history of a certain clade in a strictly bifurcating tree. A recent study in Science Advances shows that this also holds for the largest mammals on this planet: whales. Ulfur Arnason (Lund University) and his colleagues write that “the evolution of rorquals can only be accurately understood by phylogenetic networks.” I couldn’t agree more!

Putting things into perspective: a diver and a blue whale (from https://ourplnt.com/)

The study focuses on the rorqual family (Balaenopteridae) which includes the iconic blue whale (B. musculus). It just occurred to me that one of the smallest mammals, the house mouse (Mus musculus), has the same species name (musculus) as one of the biggest mammals on this planet. Is this some kind of taxonomic inside-joke? Anyhow…the researchers sequenced the genomes of six species, namely:

As you might have noticed, the last two species belong to different genera. This classification is based on morphological characteristics, but is not supported by recent genetic studies. Indeed, also the current study finds that gray whale and humpback whale are embedded within the genus Balaenoptera. This indicates that – despite their divergent morphology – they should be reclassified into that genus. 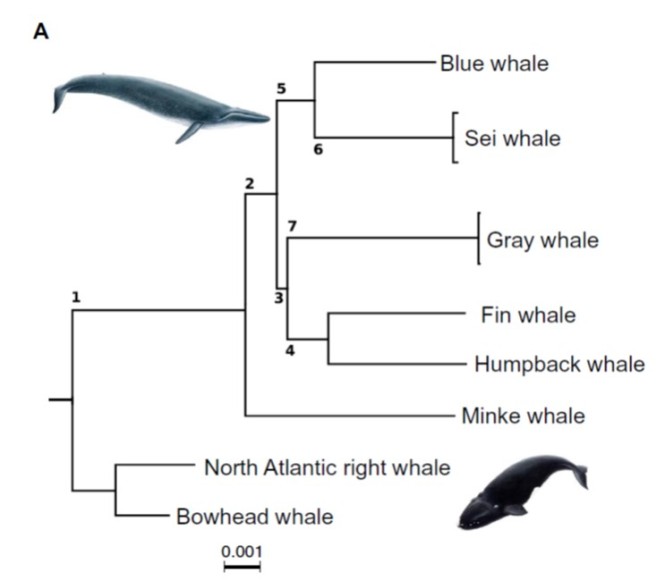 The phylogeny of rorquals (from Arnason et al. 2018). Notice the position of gray whale and humpback whale within the genus Balaenoptera.

Apart from a tentative taxonomic turnover, the results showed a high degree of gene tree discordance (i.e. different genes showing different gene trees). Further analyses revealed that this incongruence is probably due to several hybridization events. For instance, there has been gene flow between the ancestors of blue/sei whale and fin/humpback whale. Hence, the evolution of whales is better represented by a phylogenetic network.

The evolution of whales is best depicted as a phylogenetic network (from Arnason et al. 2018)

It might come as a surprise that whales hybridize. But it actually makes sense. First, the marine environment has no physical barriers, so whales are essentially sympatric. Second, rorquals have a very conserved karyotype with 22 pairs of chromosomes, which facilitates the production of fertile offspring. And finally, hybrid whales have been observed. In 1991, for example, scientists reported a hybrid between blue whale and fin whale.

But how can whales diversify in a homogeneous marine habitat while hybridizing? Killer whales (Orcinus orca) might provide a clue. These familiar animals are diversifying into specific ecotypes: a “transient” ecotype preying on mammals and a “resident” ecotype preying on fish. This ecological specialization drives sympatric speciation in killer whales. Something similar might have happened in rorquals.

Killer whales might provides clues on how whales diversify in a homogeneous marine environment (from: http://us.whales.org/)

5 thoughts on “It’s not a tree, but a network! New insights into the evolution of baleen whales”