I came across two avian hybrid papers that have several things in common. First, both studies sampled extensively in Asia. Hybridization studies on Asian birds are relatively rare. Most research is still situated in Western Europe and North America, but luckily the other continents are catching up. Second, both studies concern tits (I considered the title “Asian Tits” for this post, but I was afraid it would have attracted the wrong audience). One study focuses on Penduline Tits (genus Remiz), while the other involves Long-tailed Tits (genus Aegithalos). 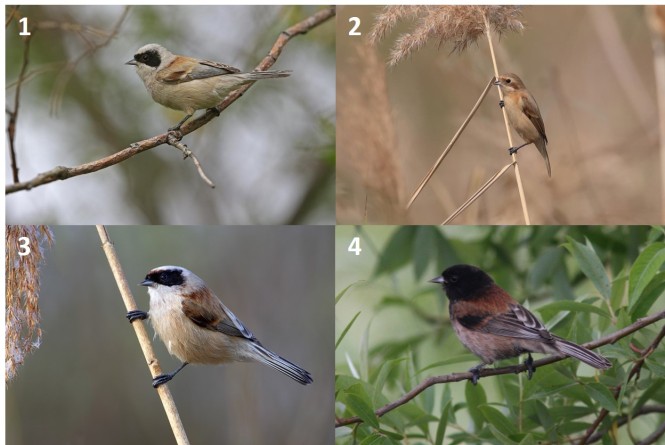 Despite being well-studied by behavioral ecologists, there is no proper phylogeny (i.e. evolutionary tree) for this genus. So, Hossein Barani-Biranvand and his colleagues sampled all species and sequenced the mitochondrial cytochrome-b gene along with ten microsatellites to solve this phylogenetic conundrum. The genetic analyses uncovered three distinct evolutionary lineages. White-crowned and Chinese Penduline Tit are clearly separate species, but there was little genetic differentiation between Eurasian and Black-headed Penduline Tit.

The genetic similarity between Eurasian and Black-headed Tit is rather surprising when you consider their morphology. They certainly look very different. This result can be explained by very recent speciation or hybridization (or both). Observations of birds with intermediate morphology near Topar (Kazakhstan) suggests that these species are interbreeding. The authors indicate that further genomic studies are needed. Exciting!

The second study starts where the first one ended: with genomic data. Dezhi Zhang and colleagues RAD-sequenced two closely related species: Black-browed Bushtit (A. bonvaloti) and Sooty Bushtit (A. fuliginosus). These small fuzzy balls are mostly allopatric but meet in a narrow contact zone in central China. The ideal setting to study hybridization.

The genomic analysis revealed bi-directional gene flow, mostly going from Black-browed into Sooty Bushtit. But the main focus of the paper was the genomic landscape, a concept that is heavily debated these days. If you align two genomes and calculate divergence statistics for each region as you slide along the genome, you would uncover a landscape with peaks of high differentiation and valleys with no genetic differences. This genomic landscape has been found for many species (starting with Ficedula Flycatchers), but the processes that shape these landscapes are currently being investigated (you can read more about this in my recent Avian Research paper). With regard to these Bushtits, the authors suggest that linked selection (i.e. selection on certain genomic regions and their neighbors) may account for differentiation in allopatry, but not in the hybrid zone.

The genomic landscape of Bushtits. A divergence statistic (here Fst) is calculated for regions across the genome. Each dot represents one such region. Different shades of blue correspond to different chromosomes (from: Zhang et al. 2017, Molecular Ecology).

These two studies make me feel like travelling east to explore the avifauna there. How about you?

These papers have been added to the Aegithalidae and brand new Remizidae pages.