The White Wagtail (Motacilla alba) is one of my favorite bird species to observe. They frantically hop around the lawn occasionally wagging their long tail up and down. This small black-and-white passerine has a wide distribution across Eurasia and is divided into several subspecies. Some subspecies interbreed in narrow contact zones. A recent study in Molecular Ecology focused on a hybrid zone between two subspecies: alba and personata. 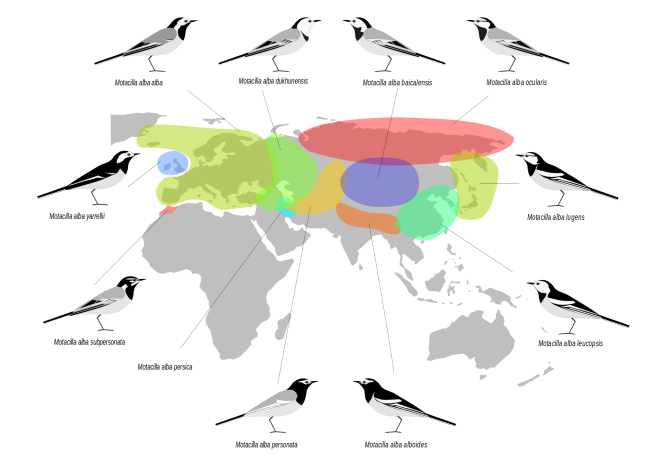 Georgy Semenov and colleagues collected samples across a 3000 kilometer long transect which ran from the Altai Mountains in Western Siberia (home of the alba) to Kazakhstan and Uzbekistan (where personata resides). They compared the distribution of several morphological and genetic traits along this transect. Genetically, the center of the hybrid zone was located in northern Kazakhstan. Most morphological characters also centered in this region, except for one trait: head plumage.

The transition from alba-like heads to personata-like heads was located about 300 kilometers northwest from the genetic center of the hybrid zone. Such displacement of plumage pattern transitions have been observed in other bird species as well. For example, red plumage of Fairy Wrens in Australia or the yellow plumage of Manakins in Panama. The observed pattern suggests that head plumage plays an important role in reproductive isolation between these White Wagtail subspecies. This suggestion is further supported by observations that Wagtails choose their partners based on head plumage.

Whether head plumage is an important feature in other Wagtail species remains to be investigated. But if you look at Yellow Wagtail (M. flava) subspecies, it seems like a plausible scenario. 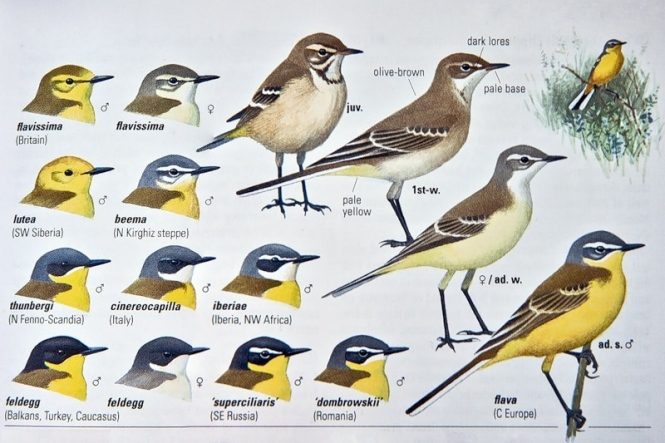 The diversity of Yellow Wagtail subspecies (from http://www.birdingnetherlands.com/spring-yellow-wagtails)

Thanks to Georgy Semenov for sending me this paper, which has been added to the Motacillidae page.

4 thoughts on “Watch Your Head: Why White Wagtails Won’t Mix”