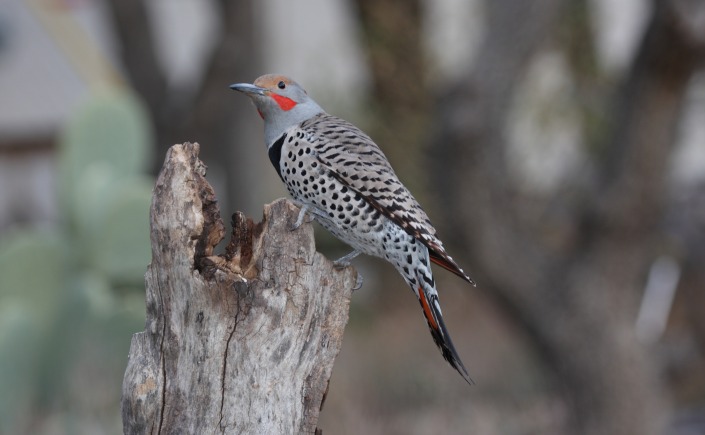 Finding the genetic basis of plumage coloration remains one of the most exciting topics in ornithology. In the past, researchers mainly focused on the genes underlying whole-body coloration, such as the white and blue morphs in Snow Geese (Anser caerulescens). Nowadays, we can zoom in on particular patches on the body and use genomic data to pinpoint candidate genes associated with certain plumage patterns. For example, a recent study on Setophaga warblers found that a single genetic variant determined the colors of the cheek, crown and flank in these birds. This study took advantage of hybrids between Townsend’s Warbler (S. townsendi) and Hermit Warbler (S. occidentalis) which show a range of plumage combinations, making it easier to link particular genomic regions to plumage traits.

Another recent study in the Proceedings of the Royal Society B took a similar approach to detect “plumage genes” in the Yellow-shafted Flicker (Colaptes auratus auratus) and the Red-shafted Flicker (C. a. lathami), two woodpeckers differ in the coloration of several plumage patches. Extensive hybridization in North America has resulted in the full range of possible plumage combinations. Stephanie Aguillon and her colleagues used this phenotypic variation to their advantage to find the genes associated with these plumage patches.

Before delving into the genomic analyses, we need to understand the difference between two pigments: melanin and carotenoids. The pigment melanin is produced endogenously (i.e. by the bird itself) and leads to grey, black and brown colors. Carotenoids, on the other hand, are obtained through the diet and underlie red, yellow and orange coloration. The plumage patches in the woodpeckers are determined by both pigments types.

The researchers compared the genomes of 10 Yellow-shafted Flickers, 10 Red-shafted Flickers and 48 hybrids. A genome-wide association (GWA) analysis uncovered several genomic regions associated with the plumage patches. Some genomic regions were connected with multiple traits, whereas others were unique to one particular trait. In total, the researchers identified 112 candidate genes.

I will not discuss all 112 candidate genes in detail, but focus on one particularly interesting gene: CYP2J19. This gene resides on chromosome 8 and was significantly associated with the coloration of the wing and tail (which form the characteristic shaft). Loyal readers of this blog might recognize the name of this gene: it also underlies the forecrown coloration in Red-fronted Tinkerbird (Pogoniulus pusillus) and Yellow-fronted Tinkerbird (P. chrysoconus), which I covered in a previous blog post. This gene seems to be one of the most important genes determining red and yellow coloration in birds.

The analyses revealed some connections between carotenoid traits and melanin genes. This is very unexpected as these pigments derive from different biochemical pathways. The researchers offer three possible explanations for this surprising finding:

More detailed genomic analyses are needed to discriminate between these explanations. Luckily, there are plenty of hybrids to work with.