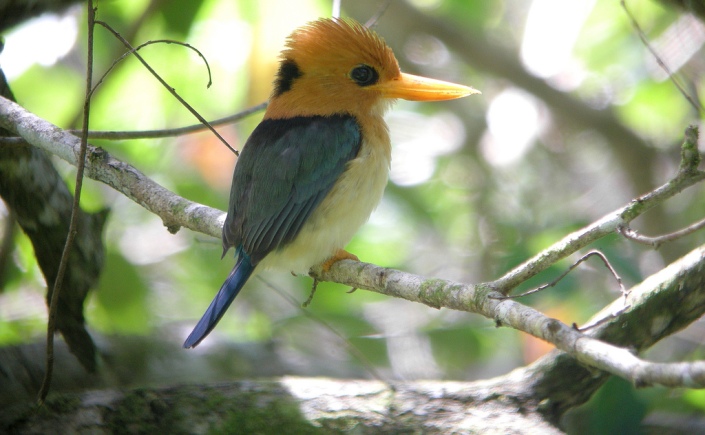 And how common is this speciation model in birds?

Hybrid zones have often been described as “natural laboratories” that scientists can use to study the origin of new species. Indeed, the formation of a hybrid zone is tightly linked with two geographical modes of speciation: allopatric speciation and parapatric speciation. I briefly discussed these concepts in my PhD thesis:

The model of clinal speciation can also be applied to elevational series where closely related species have overlapping distributions along an elevational gradient. According to the gradient speciation hypothesis, these elevational series are the outcome of local adaptation to different elevational niches, resulting in the the evolution of reproductive isolation between the parapatric populations. In a recent study in the Journal of Evolutionary Biology, Ethan Linck and his colleagues tested the gradient speciation hypothesis for two kingfisher species in New Guinea: the yellow-billed kingfisher (Syma torotoro) and the mountain kingfisher (S. megarhyncha).

The yellow-billed kingfisher is a lowland forest species that occurs primarily below 700 m, whereas the slightly larger mountain kingfisher can be found above 1100–2200 m or higher in mid-montane forest. The researchers suspected that these species might adhere to the gradient speciation hypothesis for several reasons. First, both species are territorial and sedentary, which might ensure that they don’t disperse far and are thus subject to strong local selection across the steep environmental gradient. Second, the larger size of the mountain kingfisher is consistent with predictions of morphological adaptation to a cooler climate, suggesting local adaptation. And third, some geographically isolated populations of the mountain kingfisher show differences in bill markings, which may be the outcome of parallel evolution along the elevational gradient. If so, we would expect to see several population pairs of yellow-billed and mountain kingfisher that independently adapted to the environmental conditions.

Despite these reasonable arguments, the researchers found no evidence for the gradient speciation hypothesis. Both species form distinct genetic groups with clear acoustic and morphological differences (see figures below). These results contradict the idea that geographically isolated populations of the mountain kingfisher independently adapted to life at higher altitudes. Moreover, the best demographic model indicated a scenario of allopatric speciation with secondary contact.

In addition to unraveling the evolutionary history of these kingfishers, the researchers performed a literature to quantify the generality of the gradient speciation hypothesis in birds. They report that “of the 24 taxa included in our review, 17 concluded secondary contact was the exclusive mechanism behind the formational of elevational replacements. […] All putative cases of gradient speciation lacked corroborating population genomic evidence.” These findings indicate that parapatric speciation along elevational gradients is probably a rare phenomenon in birds.

This paper has been added to the Coraciiformes page.