Do day-active species have bright eyes, while night-active ones have dark eyes?

This week, I was watching the Belgian television show Iedereen Beroemd (which translates to Everyone Famous). This show is a collection of small clips about everyday life in Belgium, including the adventures of biologist and movie-maker Pim Niesten. Every week, he shares great footage of local wildlife and provides some background information. This time, he focused on the little owl (Athene noctua). While showing some videos of the nestlings in a cavity and the adults gathering food, he starts explaining an interesting fact about owls. Pim states that you can deduce the hunting behavior of an owl species from its eye color:

Whenever I hear such bold statements in the media, I get suspicious. Can you make this claim based on only a handful of examples? To test this statement, I dove into the scientific literature and found a 2018 study in the Journal of Avian Biology. 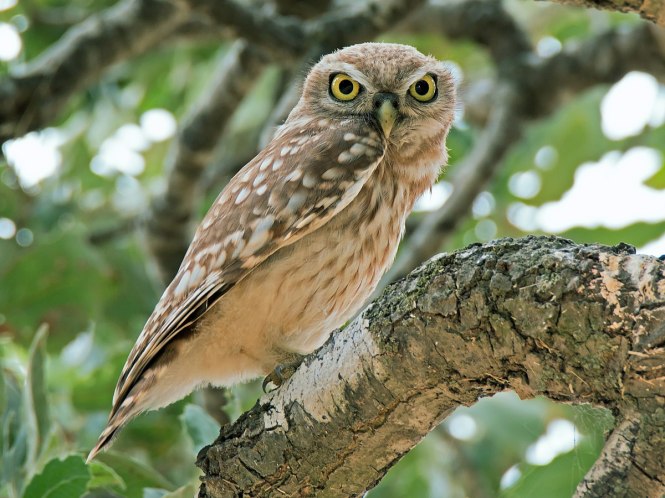 In this paper, a team of Spanish ornithologists gathered data on eye color and activity rhythm for over 200 owl species. The analyses revealed that dark irises were more frequent among strictly nocturnal owls (41 out of 70 nocturnal species) compared to owls that are active during or at the end of the day (37 out of 131 diurnal or crepuscular species). These numbers indicate that the statement from the television show was too general. There are plenty of exceptions to the rule. To name just two: the barn owl (Tyto alba) is diurnal and crepuscular but has pitch-black eyes. And the Sokoke scops owl (Otus ireneae) has bright eyes despite being active at night.

The Sokoke scops owl has bright eyes but is active during the night. © Steve Garvie | Flickr

The paper also delved into the evolutionary history of owl eye color and uncovered a peculiar pattern: the ancestors of the two extant owl families (Tytonidae and Strigidae) probably had different eye colors. The ancestor of the family Strigidae was more likely bright‐eyed whereas the ancestor of Tytonidae was more likely dark‐eyed. This finding might relate to the different evolutionary paths these owls followed early on. The exact evolutionary changes remain to be unraveled.

In conclusion: there is certainly a correlation between eye color and activity rhythm in owls, but the pattern is not universal. And more importantly, don’t take everything you hear or read in the media at face value, question everything!