Some pictures of the masters of hybridization!

Last year, reader Nico Rosseel send me a nice collection of hybrid parrots (see here). Recently, he surprised me with some hybrid pictures of my favorite bird order: the Anseriformes, better known as ducks, geese and swans. These birds are infamous for interbreeding, resulting in some unexpected combinations. You can check out the Anseriformes-page for the latest scientific findings in this group.

But why do they hybridize so often? In my review on goose hybridization, I considered three mechanisms: forced extra-pair copulations, interspecific nest parasitism and scarcity of conspecifics. The latter situation usually occurs in captivity where different species are kept together. When the breeding season starts and an individual cannot find a mate, it might settle for a partner from another species. Given that waterbirds are very popular among bird-keepers, it is no surprise that hybrids are some common among ducks and geese. Indeed, all the pictures are from captive birds. Let’s have a look!

The first hybrid is a tricky one. It probably concerns a Barnacle Goose (Branta leucopsis) x Snow Goose (Anser caerulescens) because both parental species were present in the park. However, Nico noted that he sees some traces of Emperor Goose (Anser canagicus).

The second goose hybrid also involves Snow Goose, but this time mixed with a Bar-headed Goose (Anser indicus). Although it might be just a Bar-headed Goose without a head pattern, other characteristics (including beak color and markings on the belly) suggest Snow Goose influences. There is very interesting paper in Ornis Svecica on the traits of this particular hybrid combination. 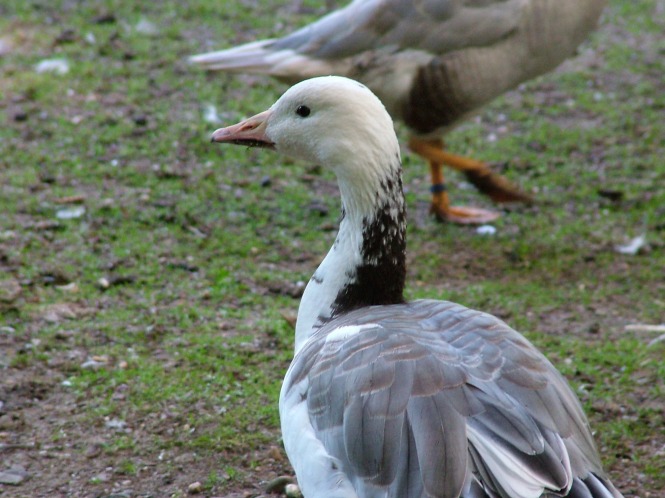 A hybrid between Snow Goose and Bar-headed Goose.

And now for some ducks! First, a hybrid from Tierpark Friedrichsfelde (Germany): Ruddy Shelduck (Tadorna ferruginea) x Common Shelduck (Tadorna tadorna). Most species in the genus Tadorna hybridize, but surprisingly this group of ducks has not been studied in great detail yet (in terms of hybridization).

Then we move to the king of duck hybrids: the Mallard (Anas platyrhynchos). Recently, I published a paper on multispecies hybridization in birds and the Mallard came out on top (pun not intended): it hybridized with 39 different species! Here are two examples of Mallard hybrids with Rosy-billed Pochard (Netta peposaca) and Red-billed Teal (Anas erythrorhyncha).

One thought on “Reader’s Hybrids: Ducks and Geese”