New species can arise despite ongoing gene flow. One possible route is ecological speciation where populations become reproductively isolation due to divergent natural selection on particular traits. A textbook example of such a scenario concerns Crossbill (genus Loxia). These birds have diversified in beak morphology because they specialized on eating the seeds from different conifer species. The different beak shapes lead to different call types which are used to form flocks. Because the birds pick their partner within a flock, there is reproductive isolation between the different call types. And it all started with a cone seed…

Over time the calls of Cassia Crossbills and Ponderosa Pine Crossbill become more different (orange line) whereas the difference with the Lodgepole Pine Crossbill remains stable (purple line). Adapted from Porter & Benkman (2019) Proceedings of the Royal Society B

The first prediction is confirmed! What about the second one? Do crossbills flock according to call type? To assess the second prediction, the researchers performed playback experiments: they played recordings of Cassia Crossbills that were similar or dissimilar to Ponderosa Pine Crossbill calls. According to the ecological speciation scenario, more Cassia Crossbills should be attracted to the calls that sounded different from the Ponderosa Pine Crossbill. And this was indeed the case as shown in the barplots below. 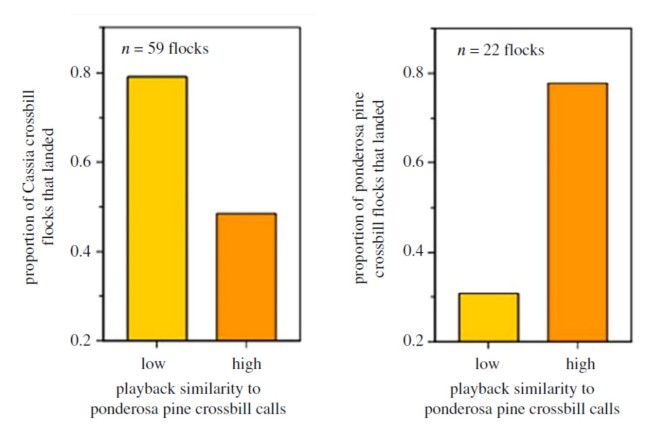 This case nicely exemplifies how cultural evolution can contribute to speciation. The calls are learned from the parents and can thus be considered a cultural trait. The authors conclude that “these increasingly divergent vocalizations are imitated by offspring, leading to call divergence at the population level and reduced heterospecific flocking. […] Because Crossbills flock year-round and choose mates from within flocks, increased reproductive isolation is probably a byproduct of character displacement in call structure.”

One thought on “Cultural evolution contributes to speciation in Crossbills”