Is there a hybrid zone between two subspecies of the Torrent Duck?

A few months ago, I wrote a blog post about the Torrent Duck (Merganetta armata). A genetic study found that this beautiful duck – which swims in the rapid waters of the Andes – is comprised of three distinct lineages, corresponding to three subspecies: colombiana, leucogenis and armata. I ended the blog post with the following paragraph:

The three mitochondrial lineages correspond to three previously described subspecies. A morphological analysis of these birds showed that the Northern Andes group (colombiana) is highly differentiation from the other two groups. The differences between the Central (leucogenis) and the Southern (armata) groups are more subtle. Possibly, these birds represent the extremes of a range of phenotypes. There might even be a hybrid zone at some location. Denser sampling is required to figure this out. If it turns out that they hybridize, you will definitely read it on this blog.

Believe or not, but a recent study in the journal Ecology and Evolution did just that. Luis Alza and his colleagues sampled individuals from these two subspecies (leucogenis and armata) and performed several genetic analyses. Is there a hybrid zone between these subspecies? 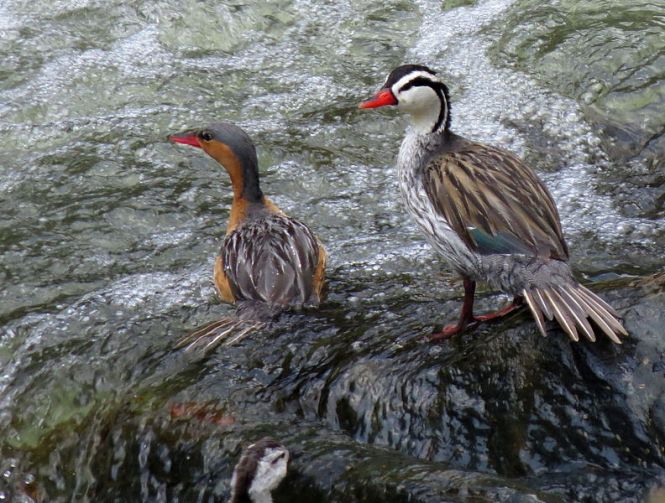 Based on an extensive data set of mitochondrial and nuclear markers, the researchers reconstructed the evolutionary history of these ducks. The analyses showed that both subspecies formed distinct clusters (i.e. they are monophyletic) and that there was no significant gene flow between them. So, unfortunately for this website, no hybrid zone between leucogenis and armata.

The lack of gene flow can be explained by the habitat specialization of Torrent Ducks. These birds rely on fast-flowing water and cannot cope with dry conditions. And the regions between the two subspecies are especially dry: the Atacama Desert in Chile, the Monte Desert in Argentina and the dry Puna in Bolivia. These regions are part of the so-called South American Dry (or Arid) Diagonal and present a formidable barrier for the Torrent Ducks.

The genetic population structure of leucogenis (in Peru) and armata (in Argentina). The Arid Diagonal presents a geographical barrier between these subspecies. Adapted from: Alza et al. (2019) Ecology and Evolution

A closer look at the genetic structure within each subspecies reveals some interesting patterns. Populations inhabiting shorter rivers have lower levels of genetic diversity compared to their cousins that swim in longer rivers. This might be the result of recent founder events: a small population colonizes a new region resulting in a decrease in genetic diversity. Such small populations are vulnerable to extinction and might disappear quickly. This interplay between colonization and extinction (or metapopulation dynamics) might have shaped the present-day genetic patterns in Andean Torrent Ducks.

These metapopulation dynamics have important implications for the conservation of these ducks. The authors advocate “to protect and manage the subspecies and riverine populations as separate conservation units due to the strong genetic structure and very low gene flow.”

This paper has been added to the Anseriformes page.