How many species of Rhynchospiza Sparrows are there?

Twenty-two. That is the number of species concepts listed by Richard Mayden in 1997. Since that overview, more concepts have been added to the list (for example, the mitonuclear compatibility species concept by Geoffrey Hill). However, proposing new species concepts is a futile endeavor. A thorough analysis of the species problem reveals that there is no silver-bullet species concept. Each case should be considered separately by investigating different criteria, such as morphology, song, behavior and DNA. These multiple lines of evidence can then be combined into a taxonomic decision. A comprehensive explanation of this process is outlined in another blog post: “A philosopher claims species do not exist. He is wrong.” Or you can check my recent book chapter on avian species concepts (available here). 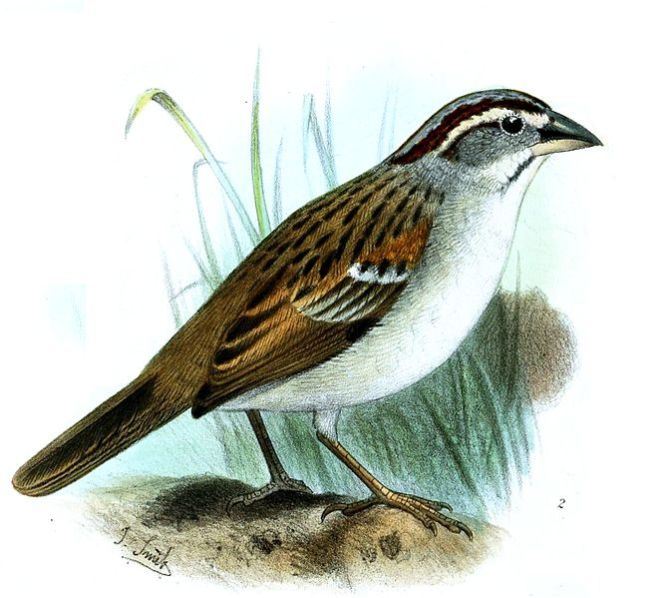 An illustration of the Tumbes Sparrow by Joseph Smit | Wikimedia Commons

A paper published in the Journal of Ornithology nicely exemplifies the use of different species concepts to draw species limits. Juan Areta and his colleagues focused on Rhynchospiza sparrows, a group of striped passerines that used to be included in the genus Aimophila. Currently, the genus Rhynchospiza comprises two species: the Tumbes Sparrow (R. stolzmanni) and the Stripe-crowned Sparrow (R. strigiceps). The latter is divided into two subspecies: strigiceps and dabbenei. This leaves us with three taxa: stolzmanni, strigiceps and dabbenei. Do these three taxa represent three distinct species? Let’s have a look at several features…

The striped-sparrows won’t come to mind when you think about tropical species. These species are not brightly colored, but mainly differ in their brownish head patterns. There are, however, some notable differences between the three Rhynchospiza taxa. The subspecies dabbenei has a diagnostic black area in front of the eyes and distinct chestnut shoulders and head-stripes. These features are reduced in the other subspecies (strigiceps). This subspecies resembles the Tumbes Sparrow, but you can identify the latter by its darker head-stripes.

The sparrows also differ in size. The subspecies dabbenei is bigger than strigiceps in several measurements, such as wing and tarsus length. And the Tumbes Sparrow is characterized by a larger bill compared to the other two taxa. Morphological differences? Check. 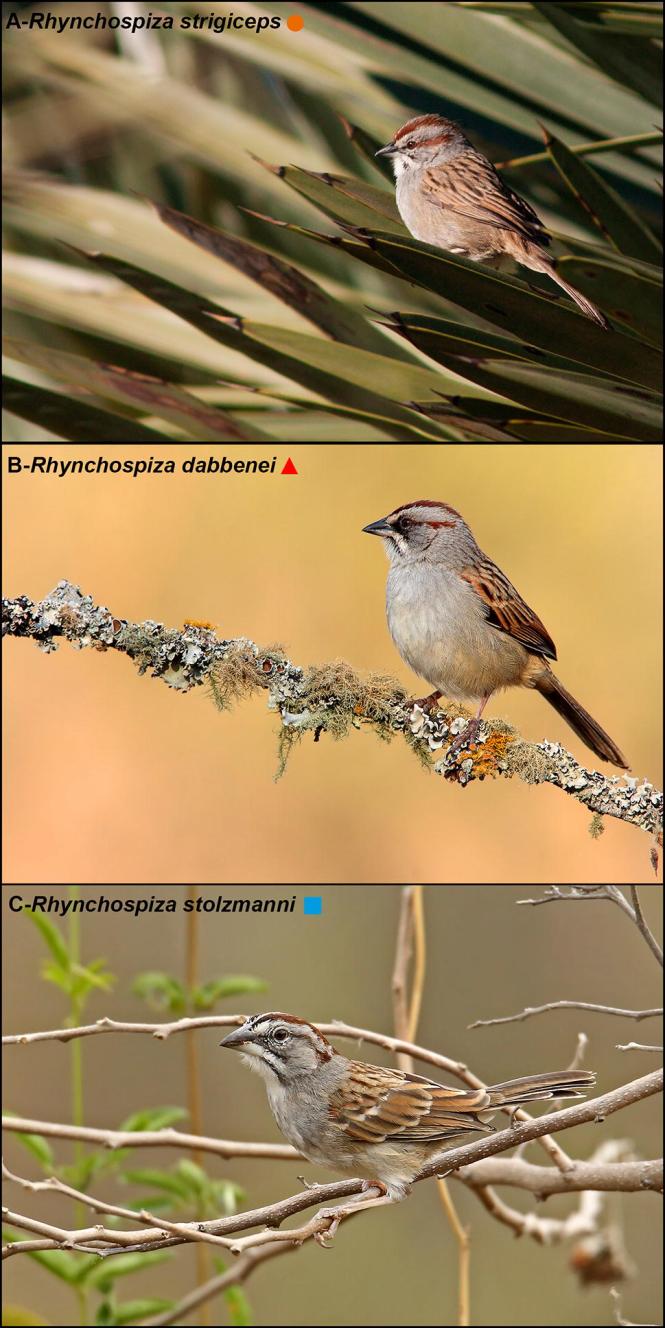 What about song? A comparison of the spectrograms shows that the three taxa produce distinct songs. The song of dabbenei mainly consists of a series of chirping notes that are repeated in long bouts. This has resulted in its local names “Chisca” (an onomatopoeia) and “Charlatan” (i.e. that who talks to much with a tendency to lie or exaggerate). The songs of strigiceps and stolzmanni are more melodic, but differ in the repetition speed: stolzmanni sings faster phrases. In addition, the three taxa produce different calls. Vocal differences? Check.

However, to conclude that these different songs play a role in species recognition more research is needed. For instance, playback experiments can reveal how the birds respond to each others’ songs. 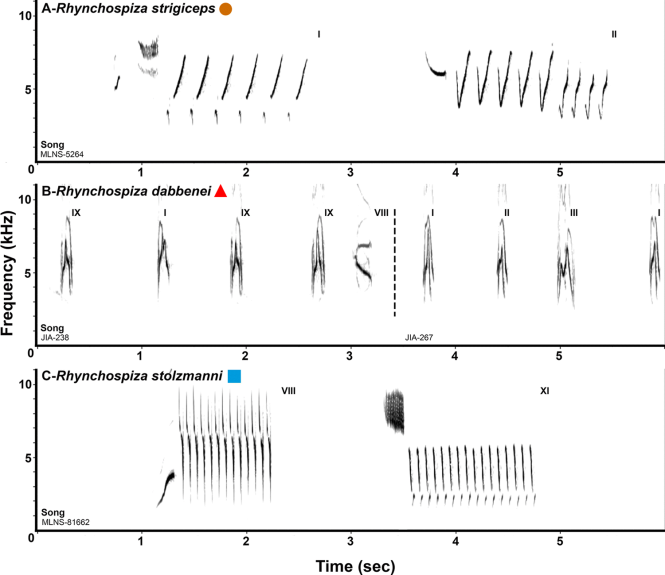 The songs of the three Rhynchospiza taxa. From: Areta et al. (2019) Journal of Ornithology

The three taxa differ in morphology and song, but can they also be separated genetically? The researchers used the mitochondrial gene NADH. Phylogenetic analyses of this gene showed that the Rhynchospiza sparrows form a distinct group in which the Tunges Sparrow is sister to both subspecies of the Stripe-crowned Sparrow. However, it would be interesting to perform more detailed genetic analyses and determine whether there is (or has been) gene flow between the different taxa. Ecological niche modelling showed that the ranges of strigiceps and dabbenei are parapatric which could result in occasional hybridization. Nonetheless, genetic differences? Check.

Furthermore, the ecological niche modelling revealed that the three taxa occupy distinct geographic areas: the Stripe-crowned Sparrow can be found in Argentina, Bolivia and Paraguay but the subspecies have distinct ranges: dabbenei occurs at high altitude in the Andes, while strigiceps lives in the lowlands. The Tunges Sparrow resides in Ecuador and Peru. These distinct distribution patterns suggest differences in habitat use and ecology. 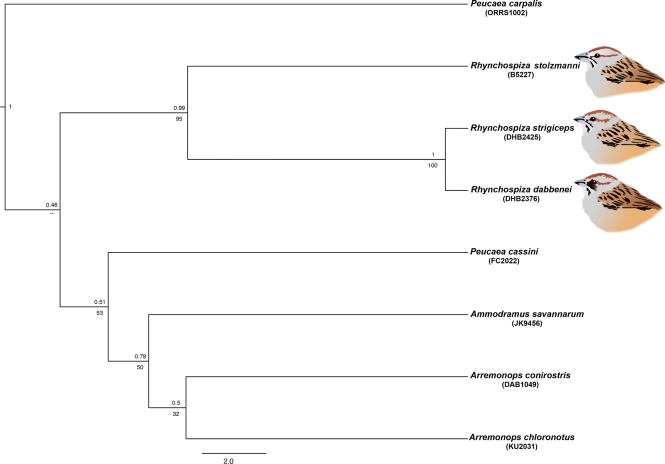 Let’s put all the evidence together. The three taxa differ in:

This list of differences prompts the researchers to recognize three distinct species. They propose to use English names that reflect the geographic distribution of these sparrows:

One thought on “Separating Sparrows: Species limits in the striped-sparrows (genus Rhynchospiza)”