Send me your pictures of Mandarin Duck hybrids!

This week, Jan Harteman (from Harteman Wildfowl) asked me if Mandarin Ducks (Aix galericulata) hybridize with other duck species. Someone once told him that this duck species cannot interbreed with other ducks because of a difference in chromosome number. My overview of duck hybrids on the Anseriformes page lists six captive crosses with Mandarin duck: 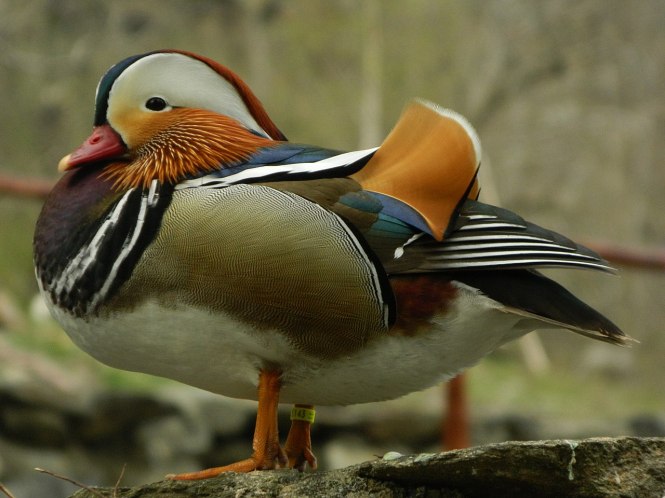 These hybrid records are based on the Serge Dumont Bird Hybrid Database, which provides references for all the listed hybrids. Most of the reported hybrids can be traced back to the Hybrid Ducks inventory of Eric and Barry Gillham. A few hybrids are supported by older articles in the Avicultural Magazine, namely “On Mandarin Duck Hybrids” by Prestwich (1960) and “Reference to possible Mandarin x Wood (Carolina) Duck and Wood Duck x Mandarin Hybrids Bred at Tracy Aviaries, Salt Lake City” by Anon (1965). Unfortunately, I cannot access these articles and judge their reliability.

There is, however, a paper by Paul Johnsgard on these putative hybrids. He provides some evidence for the Mandarin Duck x Laysan Duck hybrid but casts some doubt on the crosses with Long-tailed Duck and Redhead. In addition, he described some possible hybrids between Mandarin Duck and Wood Duck. But it remains doubtful whether these two species can interbreed. 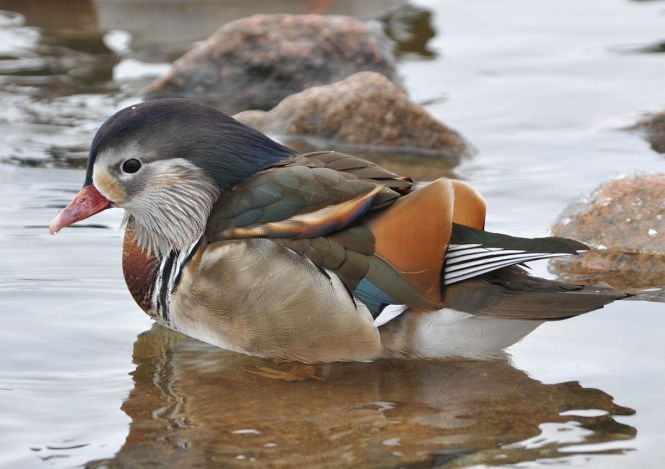 This picture has been described as a putative hybrid between Mandarin Duck and Wood Duck, but it is most likely a color mutation © Quartl | Wikimedia Commons

The idea that Mandarin Ducks cannot hybridize with other species due to a chromosomal difference has a long history. Johnsgard writes the following.

Prestwich (1960) and Gray (1958) have concluded, mirroring Delacour and Mayr (1945) and Seth-Smith (1922), that the Mandarin Duck is unable to hybridize, even with its nearest living relative the Wood Duck. The explanation usually advanced for this seemingly unique situation is a reportedly an aberrant chromosomal condition of the Mandarin Duck (Yamashima 1952).

I could not access the paper by Yamashima, but I did find the karyotype for the Mandarin duck in another study. This duck has 84 chrosomosomes whereas other ducks have 80. This difference could prevent the production of hybrids. However, horses (with 64 chromosomes) and donkeys (with 62) can interbreed and the resulting offspring, mules and hinnies, have 63 chromosomes. Perhaps other chromosomal rearrangements might have occurred in the Mandarin Duck genome? Indeed, in the book “The Cell Nucleus“, I found that all the chromosomes of the Mandarin Duck are acrocentric, meaning that one chromosomal arm is much shorter than the other. In other duck species, the chromosomes can also be submetacentric (i.e. one chromosome arm is somewhat shorter than the other). This different chromosomal shape could explain the difficulty of producing hybrids with this species.

The different types of chromosomes. Mandarin Ducks only have acrocentric chromosomes (highlighted with black box). From: http://www.liberaldictionary.com/

Thanks to Jan Harteman for bringing this mystery to my attention. If you have any burning questions about avian hybrids, feel free to contact me.

9 thoughts on “Can Mandarin Ducks hybridize with other duck species?”