The exact (genetic) impact of these threats remains to be determined, but measures should be taken.

Hybrid falcons are common in captivity. Falconers regularly cross different species, often using artificial insemination. A survey of captive falcons in the United Kingdom noted no less than 11,778 registered hybrid falcons between 1983 and 2007. Falcons that escape from captivity can cause problems in wild populations (regardless of whether they are hybrids or “pure” species). They can interbreed with wild birds, compete for breeding territories or even prey on them. A recent study, published in the Journal of Raptor Research, assessed the impact of escaped falconry birds on the Barbary Falcon (Falco pelegrinoides) population on the Canary Islands.

The Barbary Falcon is a small peregrine-like falcon. Some ornithologists consider it a separate species, while others classify it as a subspecies of the Peregrine Falcon (F. peregrinus). Barbary Falcons can be distinguished from other falcon (sub)species by its pale plumage, slimmer body and characteristic head pattern. This falcon can be found from the Canary Islands to the Arabian Peninsula.

Although the population of Barbary Falcons on the Canary Islands is increasing, it is still listed as “Endangered” by the Spanish National and Regional catalogs of threatened species. The main threats for this (sub)species are collisions with human-made structures and shooting. Monitoring the population on Tenerife, Beneharo Rodríguez and his colleagues identified two new threats: hybridization with escaped falconry birds and poaching. 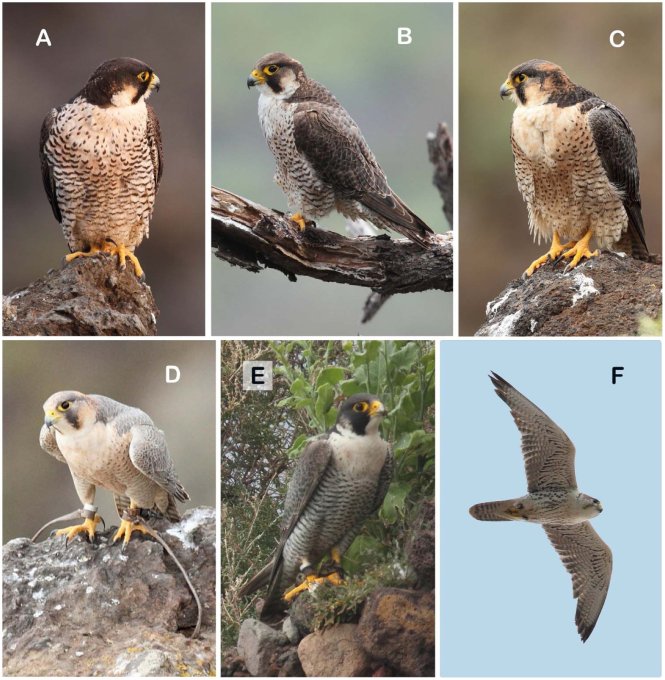 Between 1993 and 2017, the researchers observed 12 falcons that carried falconry equipment: seven Peregrine Falcons, three Saker Falcons (F. cherrug) and two unidentified individuals. Several of these birds paired up with native falcons and produced viable offspring. The genetic consequences of these hybridization events have not been studied.

Apart from hybridization with escaped birds, the researchers also recorded the poaching of nests. Of the 43 monitored nests during 2016 and 2017, six were poached. Three nesting sites were being poached each year. The picture below shows an incubating female on 5 March 2016 and an empty nest a few weeks later (1 April 2016). The damaged vegetation surrounding the nest (indicated with a white arrow) suggests that poachers climbed to the nest.

An example of a poached nest on Tenerife © Beneharo Rodríguez

The exact impact of hybridization and poaching on the Barbary Falcon population remains to be investigated. But it is clear that measures have to be taken. The researchers provide the following recommendations.

We recommend that local authorities continue to assess the degree of genetic admixture that occurs in this population, modify the current falconry regulations, implement management actions to prevent new escapes, eradicate exotic raptors, and put a stop to illegal nestling harvests.

This paper has been added to the Falconiformes page.