How the Pleistocene climate shaped the distribution of an Australian songbird.

The Pleistocene, the geological epoch that lasted from about 2.5 million to 11,700 years ago, is often referred to as the Ice Age. Large parts of Eurasia and North America were covered by ice sheets, pushing bird populations into separate refugia where they consequently diverged into different (sub)species, see for example the Ground Tit in Asia and the Red-bellied Woodpecker in North America.

Australian biologists, however, would refrain from referring to the Pleistocene as the Ice Age. During this period, Australia remained practically ice-free. Instead, cycles of aridity and sea-level fluctuations resulted in biogeographical barriers that shaped the avifauna of this continent. A recent study in the journal Heredity focused on the Grey Shrike-thrush (Colluricincla harmonica). How did the “Pleistocene Dry Age” influence this species? 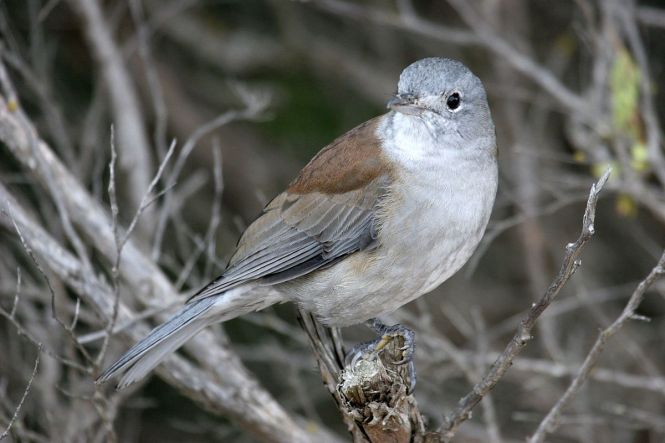 Currently, there are five subspecies of the Grey Shrike-thrush, corresponding to five regional populations across Australia: rufiventris, brunnea, superciliosa, harmonica and strigata. These populations are separated by particular biogeographic barriers. For example, subspecies rufventris and brunnea do not overlap in western Australia due to the Canning Barrier. To test which barriers have influenced the current populations structure, Annika Mae Lamb and her colleagues sequenced several genetic markers (mtDNA, nuclear introns and microsatellites) and reconstructed the evolutionary history of the Grey Shrike-thrush. 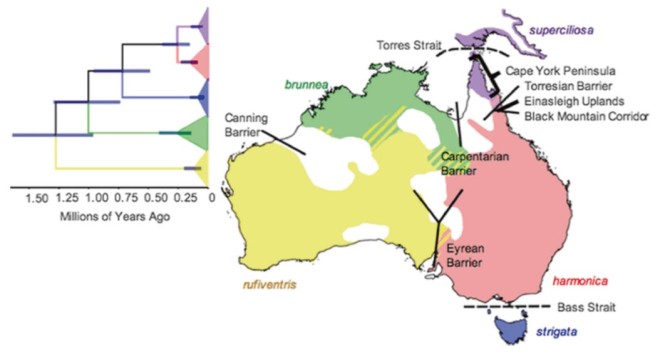 Evolutionary relationships between the subspecies (based on mtDNA) and their distribution across Australia. From: Lamb et al. 2019 Heredity

There was, however, some disagreement between the genetic markers. The evolutionary relationships based on mtDNA differed from ones using nuclear markers. This indicates that hybridization might have influenced the history of these subspecies. Indeed, at locations where populations overlapped, the researchers detected low levels of gene flow. These patterns can be explained by two – not mutually exclusive – processes: sex-biased dispersal or adaptive introgression.

First, male birds might disperse further than females and mate with members from the neighboring subspecies. This will lead to the exchange of nuclear genes (which are passed on by both sexes), but not of mtDNA (which is only passed on by females). Because females stay loyal to their geographical location, population structure based on mtDNA will correspond to geographical distributions. Nuclear genes, on the other hand, will follow the dispersal patterns of the males. Second, certain mitochondrial variants might provide an advantage in harsh, arid climates. When such a variant is exchanged by hybridization, it will quickly spread through the population. It is thus possible that climate-driven selection drove adaptive introgression of mtDNA. 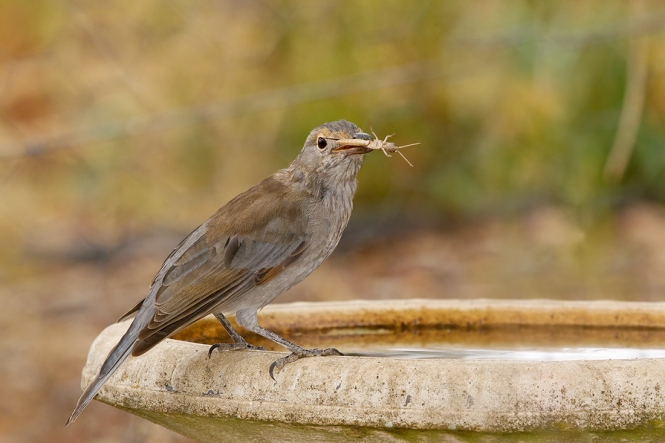 A Grey Shrike-trush enjoying its meal with a free drink. © Patrick_K59 | Wikimedia Commons

Further research is needed to figure out which of these processes – male dispersal or adaptive introgression – has been more important. The researchers thus conclude that “this and other studies should trigger a genome-wide investigation into sex-biased population processes including dispersal, mitochondrial introgression and mitonuclear evolution.”

This paper has been added to the Pachycephalidae page.