The dynamics of sexual selection revealed by the songs of the Greenish Warbler.

Males fight and females choose. That is sexual selection in a nutshell. Charles Darwin called upon sexual selection to explain certain phenomena that didn’t make sense in a natural selection context. For example, why did the peacock have such an elaborate tail? This would make it an easy target for predators. Unless something else is going on. What if females prefer males with long tails? Birds that manage to survive with such cumbersome tails should be amazing partners. In addition, sexual selection also clarified other exaggerated male traits, such as the big antlers of red deer. These over-sized hatstands come in handy when fighting off male rivals in the conquest for females. Darwin explored sexual selection in his book The Descent of Man, and Selection in Relation to Sex and the concept is still widely studied by evolutionary biologists.

The peacock’s tail and the red deer’s antlers. Textbook examples of sexual selection.

Female choice and male competition are two sides of the same coin. But these two processes do not always act in concert. Let’s explore a hypothetical example. Females might prefer males with long, colorful tails. In order to maintain their beautiful tails, males need high quality habitats with plenty of food. To defend their habitats males will have to fight off competitors, for example by chasing away intruders. But flying around your territory is much easier with a shorter tail. So, female choice selects for longer tails and male competition selects for shorter ones. What will be the outcome of this conflict?

A similar conflict is also apparent in bird song. In many species, females choose males with long, complex songs. But males need to produce short, simple songs to defend their territories. Elizabeth Scordato explored this conundrum in the Greenish Warbler (Phylloscopus trochiloides) and recently reported her results in the journal Evolution.

The Greenish Warbler consists of a chain populations around the Tibetan plateau. The ends of this chain meet in Siberia where the birds from both sides are reproductively isolated. A nice example of a ring species (but see Alcaide et al., 2014). The ecological conditions along this chain vary: in the southern populations density is high and food is scarce, while the northern populations are less densely populated and have abundant food. Could these ecological conditions have an impact on the songs of these birds? To answer this question, Elizabeth Scordato studied populations in India, Kyrgyzstan and Siberia. 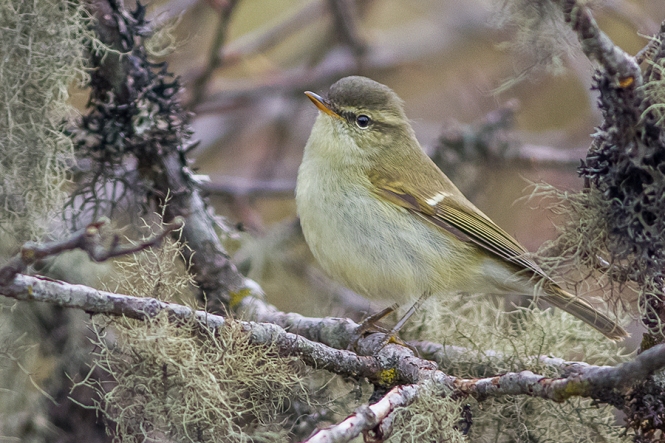 A Greenish Warbler (from: http://www.wikipedia.com/)

In all populations, females preferred males with longer, more complex songs and large repertoires. However, males in the south (India) sang shorter songs compared to males in the north (Kyrgyzstan and Siberia). This latitudinal pattern reflects the degree of male competition. In the south, population density is higher, leading to more interactions between the males and consequently strong selection for shorter songs. In the north, competition between males is weaker and there is a stronger selection by females for longer, complex songs.

A graphic showing how population density influences the conflict between male competition and female choice, culminating in different songs. (Drawings from Handbook of Birds of the World and sonograms from Scordato, 2018 Evolution)

There is clearly a conflict between female choice (long songs) and male competition (short songs) here. So, how do males cope with this situation? First, they adjust their song depending on the time of the year. Early in the season, when birds establish their territories, they sing short songs. When females are fertile, males produce longer songs. Later on, after most females have mated, males switch back to shorter songs. The figure below shows this pattern in the three populations.

Males sing longer songs when female are fertile (grey area in the graph). The pattern holds for the three populations. (from: Scordato, 2018 Evolution)

Another strategy that the males used to resolve the conflict between female choice and male competition was to aim particular components of the song at different receivers. Short, simple songs were directed towards competing males, whereas long, complex songs were sang to attract females. The analyses suggested that not only song length, but also repertoire size was subject to female choice. Males with a larger repertoire had a higher pairing success and fostered larger chicks. By contrast, competing males were not really impressed by the repertoire of their rivals.

All in all, this study shows how the strength of male competition can influence the degree of female choice. In populations with weak competition between males, birds can produce longer songs, displaying their large repertoire. The distinct selective pressures in the different populations result in song divergence and might ultimately contribute to the origin of new species.

The paper has been added to the Phylloscopidae page.

One thought on “Why do different populations of the Greenish Warbler sing other songs?”