The similar plumage patterns can be partly explained by hybridization.

Closely related species tend to look alike. So, it is no surprise that scientists have been inferring evolutionary relationships based on external characters. However, parallel evolution can complicate matters. This process – which can be defined as “similar development of a trait in distinct species which are not not closely related, but share a similar original trait in response to similar evolutionary pressure” – can lead to wrong conclusions about how species are related to one another. A recent study in Journal of Evolutionary Biology explores this issue in wheatears (Oenanthe).

Consider the following four species. How would you classify them based on plumage coloration? 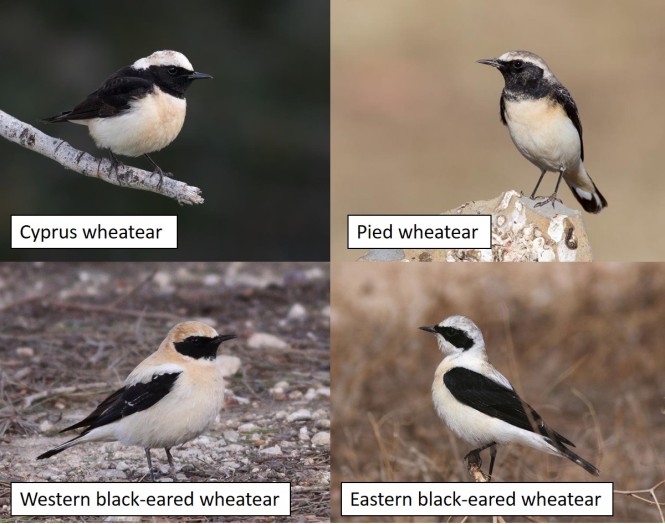 Four species of wheatear. How would you group them?

Manuel Schweizer, Vera Warmuth, Niloofar Alaei Kahki (I mention these three authors because they contributed equally to the study) and their colleagues collected samples of these four species and performed genetic analyses using about 20,000 markers. The results are not in line with the morphological classification: Cyprus wheatear is more closely related to eastern black-eared wheatear, followed by pied wheatear and western black-eared wheatear. Not what you would expect based on their plumage patterns.

The unexpected evolutionary tree for these four wheatear species. The circles indicate the plumage patterns (from: Schweizer et al. 2018)

The evolution of plumage coloration seems to be the result of parallel evolution. But what is the exact mechanism? Parallel evolution can be the outcome of several biological processes. Unrelated species might use genetic material that was already present in a distant ancestor. Or traits might be transferred from one species to another by hybridization. Or similar mutations might have arisen independently.  Unfortunately, the present study cannot confidently discriminate between these scenarios.

Finally, the genetic analyses uncovered gene flow from pied into eastern black-eared wheatear. This is not that surprising, because a hybrid zone between these species has been described before. Whether hybridization has influenced the evolution of plumage patterns in these species remains to be investigated.

This paper has been added to the Muscicapidae page.

One thought on “Looks can be deceiving: Parallel evolution of plumage coloration in wheatears”