Life as a hybrid can be difficult: infertility, low fitness, not being able to find a mate. These are just a few of the challenges that hybrid individuals face during their struggle for existence. In the end, hybrids might not succeed in surviving or reproducing. This kind of selection against hybrids is known as postzygotic isolation. A recent study in Evolution explored a peculiar postzygotic isolation mechanism: intelligence. Maybe hybrids are just too stupid?

Michael McQuillan and his colleagues assessed the intelligence of hybrids between Black-capped (Poecile atricapillus) and Carolina (P. carolinensis) Chickadee. These small songbirds are scatter hoarders, they store food items in countless places. During harsh winters they rely on these hidden treasures for survival. Remembering where you put your food (or car keys) can be crucial for survival.

The researchers performed two experiments to gauge the intelligence of both Chickadee species and their hybrids. In the first experiment, they placed a wax worm in a hole and covered it with a white “pom-pom” ball. After the birds removed the ball, they could eat the worm. However, the hole with the worm was surrounded with other holes (also covered with balls). For several days, the same challenge was presented to the birds. Would they figure it out and remember in which hole they could find a worm?

The second experiment was a real problem-solving test. The birds had to move a circular nylon washer to obtain a reward (again a wax worm). The researchers noted down how many birds were able to solve the puzzle.

Nylon washer were used to create a challenging puzzle.

The results were clear: hybrids are not that clever. They needed more days to figure out the location of the worm and not all hybrids could solve the puzzle. Interestlingly, female hybrids performed worse. This finding is in line with Haldane’s Rule, which states that the sex to suffer first from hybrid breakdown is the one with different sex chromosomes (in birds, the female has ZW chromosomes, while male has two Z chromosomes). Why hybrid chickadees have a bad memory and lower intelligence remains to be investigated. But this study could be the start of an interesting exploration into the mind of hybrids. 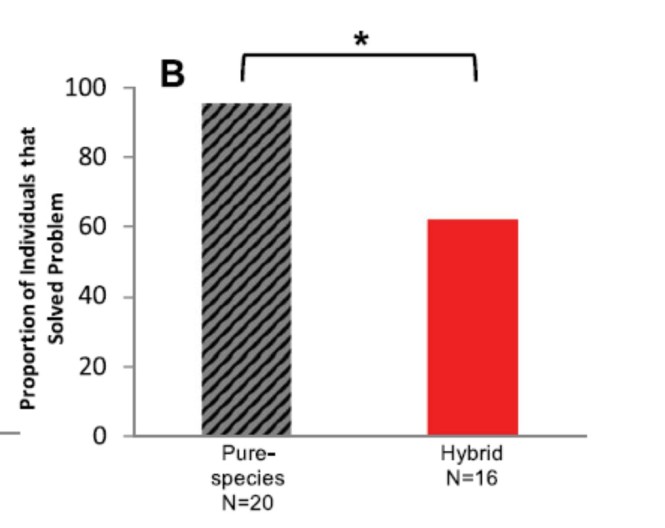 Outcome of the problem-solving experiment: less hybrids (red) could solve the challenged compared to the pure species.

This paper has been added to the Paridae page.