The posts on the Avian Hybrids Project have mostly featured summaries of scientific publications. But we should not forget that these publications would not be possible if people in the field are not reporting hybrids. Therefore, I decided to start a new series “Reader’s Hybrids” in which I post pictures of recent hybrid sightings. The first one to kick of the series is Gareth Jones, a conservation volunteer from the UK. Here are his pictures and accompanying text.

I am a conservation volunteer at the Nosterfield local nature reserve part of the Lower Ure Conservation Trust in North Yorkshire. I regularly visit the reserve as a birder and the morning on 9th April I saw an unusually marked goose. It was nearly a Canada Goose but the head markings were different. Rather the clear white bar it had a white circle on the cheek that faded at the edges into the dark coloured head. I asked around and it appears to be a Canada Goose x Greylag hybrid. 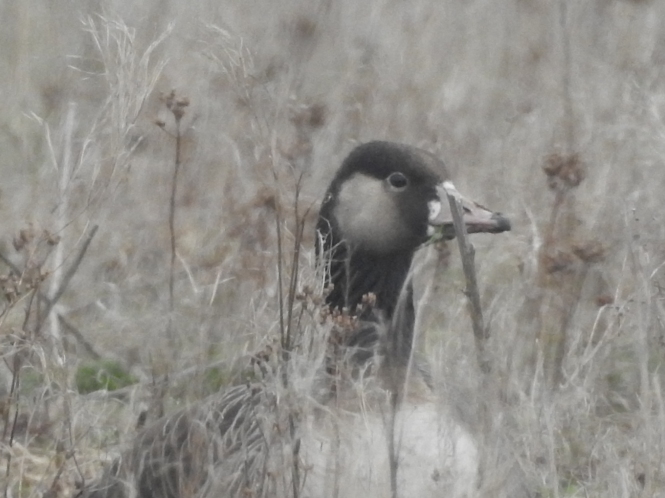 This observation reminds me of a report by Simon Delany from 1992 where they surveyed introduced geese in the UK: “No fewer than 18 types of hybrid between these species were found, mostly in very small numbers, but there were 261 Canada x Greylag Geese.”

Want to know more about goose (and other waterfowl) hybrids? Check out the Anseriformes page.

Feel free to send your hybrid observations to jente.ottenburghs[at]hotmail.com.

One thought on “Reader’s Hybrids: A Canada Goose x Greylag Goose in the UK”