On 14 July 1867, Henry Charles Rawnsley shot a bowerbird at his house near Brisbane, Queensland (Australia). That unfortunate specimen was later used to describe a new species: the Rawnsley’s Bowerbird (Ptilonorhynchus rawnsleyi, it is a bit ironic that a new species is named after its killer). Here is a drawing of the bird: 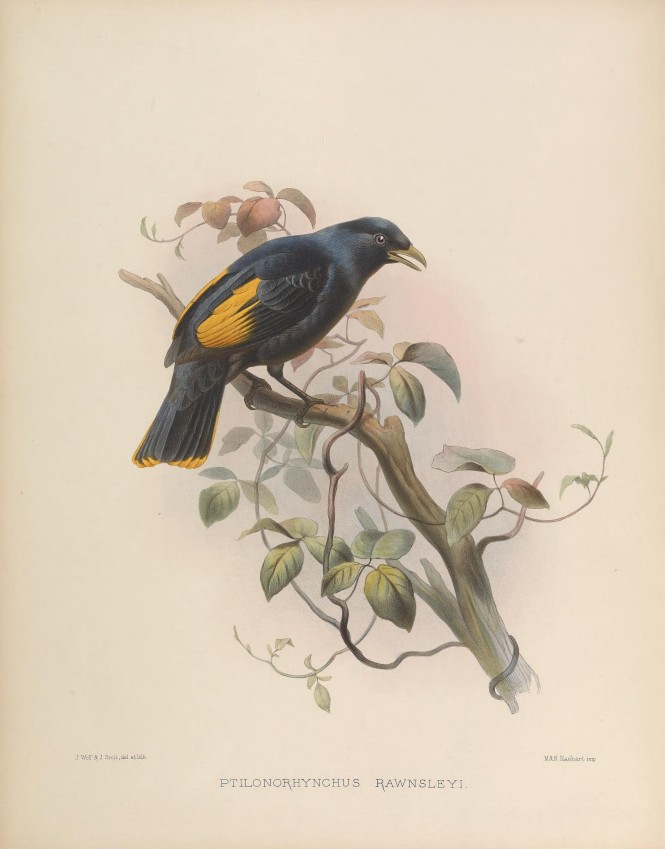 A review of this specimen led to the conclusion that it was a hybrid between Regent Bowerbird (Sericulus chrysocephalus) and Satin Bowerbird (Ptilonorhynchus violaceus). Recently, a second specimen of this ‘species’ has been observed at Beechmont. The pictures taken there show a striking resemblance with the drawings from the 1800s.

It is not the first time that a hybrid specimen has been classified as a new species. Other notorious examples include Argus bare-eye (Phlegopsis barringeri),  Imperial Pheasant (Lophura imperialis) , Brewster’s Warbler (Vermivora leucobronchialis) and Lawrence’s Warbler (V. lawrencei). I wrote about these ‘species’ on my other blog: Evolutionary Stories. See here and here.

Frith, C. B. 2006. A history and reassessment of the unique but missing specimen of Rawnsley’s Bowerbird Ptilonorhynchus rawnsleyi, Diggles 1867,(Aves: Ptilonorhynchidae). Historical Biology, 18: 57-68.

Many thanks to Clifford Frith for providing me with the original 2016 paper. The papers have been added to the page of Ptilonorhynchidae family.

2 thoughts on “Rawnsley’s Bowerdbird: Another species that turns out to be a hybrid”